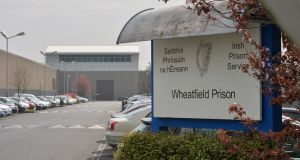 Two men were in hospital last night and a number of others were in Garda custody after a significant disturbance outside Wheatfield Prison, west Dublin.

At about 3pm on Wednesday a group of men set upon two men on the grounds of the prison on Cloverhill Rd, west Dublin.

Gardaí believe the men were known to each and that the attack was targeted. The attackers left their victims seriously injured before fleeing in a car.

A short time later a vehicle carrying a number of men was stopped by gardaí on Kennelsfort road, Palmerstown, about 2km from the prison.

“A number of arrests were made at scene, and all individuals arrested have been detained across Dublin Garda Stations under Section 4 of the Criminal Justice Act,” the Garda said.

The car the arrested men were travelling in was taken away by the Garda for forensic examination. Gardaí in Lucan have appealed for anyone in the area between 2.30pm and 3.15pm to come forward, especially those who were recording dashcam footage at the time.