Miriam Lord: Childcare workers give candidates a wake up call 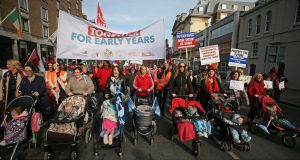 “Happy to change a nappy, but not to put up with this s***,” read one placard. Photograph Nick Bradshaw

The protesters stretched all the way down the south side of Merrion Square, as far as the eye could see. Around the corner, through the trees to the east, you could glimpse the movement of thousands – maybe 10,000 more.

It was a stirring sight. Almost all the marchers were women, many wheeling buggies or marshalling small children alongside them. This demo was huge – 30,000 marchers was the estimated figure by the time the tail end of the procession caught up with the crowd.

These were the childcare workers – “early years professionals” – who are fed up, tired and angry with the lack of support from the State for the important job they do in educating the nation’s children in their most formative years.

“The brain reaches 90 per cent of total development by five-years-old,” was written on one of the placards.

They marched past the statue of Oscar Wilde, around the square towards the platform in front of the gates of Leinster House. A quiet place these days with the general election in full swing. But there were a few more TDs around than usual on this final Wednesday before polling day, which was unusual. Every minute counts in the constituency at this crucial stage.

Some TDs travelled from far flung constituencies to be back in Kildare Street.

“I knew it was going to be big so I came up for it,” former Fine Gael minister Denis Naughten told us. He is standing as an Independent in Roscommon-Galway. He walked part of the way with the women.

Behind the platform, Michael Collins, outgoing Independent for Cork South-West, was standing at the crowd control barrier, expressing his support for the workers as a supporter wearing a “Vote Collins number one” sticker filmed him on her iPhone.

Richard Boyd Barrett and Paul Murphy were among the members of People Before Profit/Solidarity who marched all the way with the women. A number of Fianna Fáil TDs were also at Merrion Square to show support, including Barry Cowen, Anne Rabbitte and Niamh Smyth.

Earlier, Sinn Féin leader Mary Lou McDonald, embroiled in controversy over comments made by MLA Conor Murphy about IRA murder victim Paul Quinn, was cheered by many of the protesters who passed by while she was making a statement to the media on the steps of her party headquarters.

McDonald and her advisers must have been heartened by the spontaneous reaction from many of the women. “You are the future,” said one admirer, while a high-spirited contingent burst into a chorus of “Hello, Mary Lou”.

On stage, speaker Marie Daly from the National Early Years Forum recalled a similar march in 2015, when they thought a turnout of 2,000 people was a fantastic success. “I am so, so, so proud of every single person who is taking a stand for our profession . . . We matter and we need to say this on a regular basis.”

“Unless we say ‘Stop’ we will be ignored.”

Taoiseach Leo Varadkar was on the scene. So too was Micheál Martin, who wants Leo’s job. Micheál facing one way, Leo the other. In fact, multiples of the two men were there, their images adorning the lamp posts along both sides of the road.

The Taoiseach was out on the campaign trail. The Fianna Fáil leader in his campaign headquarters a few minutes walk from the protest, starting into an afternoon of media interviews.

So they heard nothing. Which will have come as no surprise to the childcare professionals – many educated to degree level and beyond – who don’t get the same attention as the members of childminders’ unions likes the INTO and ASTI who have politicians dancing attention on them at their annual Easter childminders’ conferences.

Sure they only mind the babbies and aren’t they great all the same, these overlooked education professionals who now struggle with too much administration, spiralling costs, a pittance of a paycheck and scant support from the State.

They have had enough. Anyone out on the doorsteps or on the canvas with party leaders and senior politicians in the last few weeks will have heard their anger. Leo got it in the neck in Cavan a couple of weeks ago.

Fed up and seeking change

These are the people who are fed up and seeking change. These are the people who are ignored by the two big parties which have ruled the roost in Ireland for all their adult lives, now led by the two men looking down on them from the lampposts. Apart from the low wages and undervalued work, they also have bills and expenses to pay and families to raise.

The group from “Bright Beginnings” near Bantry in west Cork set out at 10 past five in the morning to get their bus to Dublin. Kathleen Kehoe, Mary Ellen O’Leary, Janice Field, Clare Fitzgerald and Catherine O’Sullivan didn’t have much faith in politicians.

“They need to recognise we’re part of the education system. All we can do is stand our ground,” said Kathleen.

“Look at that crowd today. They’ve got to hear that voice,” said Catherine. “People working in Lidl and Aldi are getting paid more than us and I have a four-year honours degree,” added Mary Ellen, while Janice was unhappy with “the same government being voted in all the time”.

So what have candidates being saying during this campaign? They must be offering some degree of hope?

But it seems not. “I’ve had one call to my house,” recalled Clare “and all he said was: ‘I know where you’re coming from. My sister has two kids in childcare.” This was a Fianna Fáil councillor.

It was a similar story from Lisa Stirling and Serena Condron from the Rowlagh Women’s Group in Clondalkin. They are level 8 and level 6 practitioners.

“I haven’t heard anybody speak about childcare in the elections. They want quality childcare but won’t pay quality rates of pay,” says Lisa.

Both women “will be voting for change”.

Lisa is keen to stress that “it’s not just for childcare. It’s because we need a change.”

They will both be voting Sinn Féin. “I hope they’re not just saying things,” laughs Serena.

Back inside Leinster House a Sinn Féin politician tells us privately that Fine Gael candidates “are shocked” by the attitude of voters “in the country” who aren’t following the usual party line. “They’re turning on each other now.”

Martin, meanwhile, was hoping FG supporters might “lend” their vote this time to Fianna Fáil. With his party likely to get the most seats, the more they get, the easier it will be for them to keep Sinn Féin out.

Echoes of the “put him in to get him out” Sinn Féin election slogan in 1918 – a tactic to keep Arthur Griffith out of prison.

Over a hundred years later, and it’s Fianna Fáil against Sinn Féin saying “put us in to keep them out”.

And that was the only other general election to be held on a Saturday.