Woman exhumed after being buried in wrong grave in Kerry cemetery 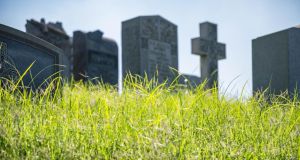 St John Paul II cemetery in Listowel, Co Kerry was closed to the public on Friday while the exhumation and reburial took place. File photograph: iStock

A woman’s body has been exhumed from a grave in a Co Kerry cemetery after she was buried in a plot bought by another family following an apparent error by Kerry County Council.

The woman has since been buried in a different plot at St John Paul II cemetery in Listowel and council sources expect a formal apology will be issued to the two families involved.

“At the request of the families involved and out of respect for their privacy, Kerry County Council will not be commenting on the matter,” the council said when asked about the matter on Monday.

Radio Kerry on Monday reported that the council had carried out the exhumation and reburial. The cemetery was closed to the public on Friday while this took place with officials from the council and HSE environmental health officers present, as required by legislation.

Grave plots are sold only when a death has taken place and it is understood that last March, following the death of a woman in her 60s, three plots were bought by her family.

A fortnight ago that woman’s husband arrived to visit his wife’s grave and noticed that another woman had been buried in the adjoining plot.

It is understood that the same plot was sold twice by the council in error.

A person close to the families concerned said both were deeply hurt by the way the matter was dealt with by the local authority.

“The whole thing has added to the families’ grief,” the source said, adding that a written apology had not yet been received from the council.

“Both these families are grieving they are at a very early stage of handling grief. For a body as big as Kerry County Council to deal with families who are so traumatised in this way is not on.”

Last night Kerry County Council said contact was made and maintained with both of the families affected “ from the outset and formal apologies have issued to both families involved, having due regard to the sensitivities involved”.

“The council is reviewing existing procedures in this matter.”