Fatal incident before 2.30pm at roundabout between Templeville Rd and Whitehall Rd 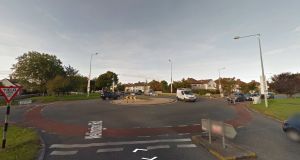 A woman cyclist was killed when in collision with a lorry shortly before 2.30pm on Monday at the roundabout between Templeville Road and Whitehall Road in Dublin 6W. File photograph: Google Street View

A woman in her late 30s died on Monday after she was hit by a lorry while cycling in south Dublin.

The incident occurred shortly before 2.30pm at the roundabout between Templeville Road and Whitehall Road in Dublin 6W. The woman was brought to hospital with serious injuries and was pronounced dead later in the day. No other injuries were reported.

Templeville Road was closed for a time while Garda forensic collision investigators worked at the scene, but later reopened.

Gardaí appealed for witnesses or anyone with information about the incident, in particular those who were in the area around Templeville Road, Whitehall Road and Wellington Road between 2pm and 2.40pm on Monday, to contact them at Terenure Garda station on 01 555 6400, the Garda Confidential Line on 1800 666111 or any Garda station.

The woman’s death came after a weekend in which five people were killed in a number of road crashes across the State.

Two teenagers, Gary Kelly (19) and Delia Keary (18), lost their lives when the 4x4 in which they were travelling collided with a lorry about 2km outside Abbeyfeale, Co Limerick, on Friday evening.

Mr Kelly died at the scene and Ms Keary suffered serious injuries during the incident. She died in hospital on Saturday night.

Separately, a 50-year-old male cyclist was killed in Co Clare on Sunday morning in a collision with a camper van. The incident occurred at 11.45am on the N18 Limerick to Galway Road, near Bunratty. He was named locally as Des Butler from Caherdavin, Co Limerick.

In Cork, a 21-year-old man died when his car struck a ditch and then a pole on the Boherbue-Kiskeam road in north Cork in the early hours of Sunday morning.

The man, named locally as Denis Collins, from Chapel View in Kiskeam, was pronounced dead at the scene.

In Co Mayo, a man in his 30s died after his car left the road and hit a wooden fence on Sunday morning.

The incident happened at 4.20am on the N59 in Kilbride, Newport. The man was the only occupant of the car.