Leo Varadkar: no plans to enforce top-up of maternity benefits 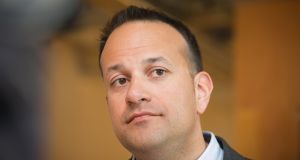 The Government has no plans for legislation to force employers to pay women full pay or to top up their welfare benefits when they take maternity leave, Minister for Social Protection Leo Varadkar has said.

However, Mr Varadkar said the Government would encourage employers to do so and to provide the best possible maternity packages for their staff.

He said the rate of maternity benefit paid by his department had now increased to €235 per week – or more than €1,000 a month – and was payable for up to 26 weeks following the birth of a baby.

To mark Mother’s Day, Mr Varadkar visited Facebook’s headquarters in Dublin on Sunday with a number of mothers and discussed the company’s policies on maternity benefit.

“I know that many companies in Ireland offer excellent packages but many others could do better and can afford to do better,” he said.

He urged employers to be “as generous as possible” with their maternity packages and he noted Facebook also offered four months of paid paternity leave.

“Not only is it the right thing to do to treat mothers well in the workplace, but Ireland also needs to be competitive internationally. If we want to retain our staff, and attract talent from abroad, it’s important that our workplaces are welcoming places for families.”

Asked if he would consider legislation to make employers pay better maternity benefits, he said: “We don’t require employers as yet to pay full pay or to top it up and we’re not planning to do that at the moment, because obviously there’ll be some employers that mightn’t be able to pay.”

But he said it was something that would have to be considered “in the medium term” because it was good for business.

Companies were much more likely to be able to retain staff if they offered maternity benefits, he said.

“So I think at this stage we are going to be using the maternity benefit system and pressure rather than legislation. But it is something that’s possible in the future.”

The payment is made for 26 weeks to employed and self-employed women who satisfy certain PRSI contribution conditions on their own insurance record.

The original maternity benefit scheme was introduced in 1970 and was extended to include self-employed contributors from June 1997.