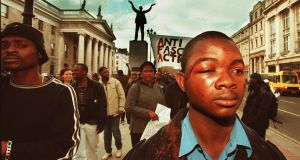 Some 245 reports of racist crimes were made through the State’s tracking system, the European Network Against Racism (Enar), between July-December 2016. File photograph: Frank Miller

Legislation used to deal with hate crime in the Republic is “wholly inadequate” and must be replaced to meet the needs of people being attacked because of their identity, it has been claimed.

Experts in hate crime and victims of homophobic and racist crimes appeared before the Oireachtas on Thursday morning calling for the introduction of hate crime legislation “as a matter of urgency”. The newly formed National Steering Group Against Hate Crime joined Fianna Fáil TD Fiona O’Loughlin in presenting a Private Members’ Bill calling for all political parties to support the introduction of the law.

At present, if a criminal offence or public order offence is committed with a racist or homophobic motive, it is prosecuted through the wider criminal law system. The Republic is one of a small minority of EU countries that does not have legislation in place to deal with hate crime.

Some 245 reports of racist crimes were made through the State’s tracking system, the European Network Against Racism (Enar), between July-December 2016, marking a significant rise on the previous six months according to data released earlier this week. The racist crime monitoring system received 190 reports in the first six months of 2016.

This data contrasts with the information on hate crime provided by the Central Statistics Office (CSO) which gathers statistics from the Garda Pulse system. According to the CSO, there were a total of 153 racially or religiously motivated crimes in the first nine months of 2016. The full statistics on 2016 are not yet publicly available.

Dr Amanda Haynes, senior lecturer in sociology at the University of Limerick and co-director of the Hate and Hostility research group which is part of the National Steering Group, says the absence of hate crime legislation discourages people from reporting crimes to the Garda pulse system. They worry the authorities will be unable to properly document the nature of the attack they have suffered and thus “withdraw from the public sphere. The lack of hate crime impacts on people’s sense of belonging and belief in whether the State values them.”

Dr Haynes says the current legislation is designed to address hate speech and is “not suited to addressing crimes motivated by hate such as criminal damage, arson, harassment and assault”.

She warns that the “hate” element of crimes is still not being reflected in a perpetrator’s criminal record. “There is no naming of the offence,” she said. “It would just be a public order offence.”

“When somebody is a victim of an assault and targeted for something that’s fundamental to who they are, they are more likely to suffer from sleep loss, depression and anxiety,” said Dr Haynes. “The effects of the attack are magnified because they’re targeted because of who they are.”

In its Migrant Integration Strategy published last month, the Department of Justice states that the current legislation which deals with hate crime will be reviewed with a view to “strengthening the law against hate crime, including in the area of online hate speech” in 2017.

Asked for further details, a spokesman for the department said the review into the Prohibition of Incitement to Hatred Act was “ongoing” and would be completed “as soon as possible”. He said behaviour amounting to hate crime was currently being addressed through the 1989 Act and “wider criminal law”.

Shane O’Curry from Enar Ireland, who appeared before the Oireachtas on Thursday, says gardaí are at a disadvantage as they are not provided with the tools or training for dealing with crimes of this nature.

“A review of the 1989 incitement of hatred act is not adequate at all,” he said. “It’s a wholly inadequate piece of legislation. We need robust hate crime legislation but we also need an across the board undertaking by the State driven with leadership from above to remove the barriers of racism and discrimination from every level of society.”