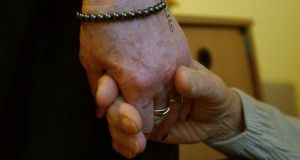 “Grace”, who is severely intellectually disabled and unable to speak, was left in a foster home in the southeast for 13 years after a decision to remove her in April 1996 was overturned in October 1996. File photograph: Getty Images

Two health board employees involved in a 1996 decision to leave an intellectually disabled girl known as “Grace” in a foster home, despite allegations of serious sexual abuse there, are still working for Tusla, the Child and Family Agency, it has emerged.

Tony O’Brien, director-general of the HSE, told the Public Accounts Committee on Thursday that despite assurances he gave in February last year that none of those involved in that decision was still in public service, one in fact still was.

When pressed further by members of the committee, Mr O’Brien conceded that another of the personnel involved in the 1996 decision was also still working for Tusla.

On February 2nd, 2016, Mr O’Brien gave evidence to the committee on the “Grace” case.

“Grace”, who is severely intellectually disabled and unable to speak, was left in a foster home in the southeast for 13 years after a decision to remove her in April 1996 was overturned in October 1996.

Mr O’Brien told the committee last year three employees of the then South Eastern Health Board (SEHB) who had been involved in the October 1996 decision “were no longer in the public service”.

On Thursday he said information had come to him on Wednesday that one of the three, identified in a report on the case as H3, “while retired from the HSE, is currently in public service on a part-time basis in Tusla. I wish to apologise to the committee for not being in a position to have had more complete information...in February 2016.”

Catherine Connolly, TD (Independent) asked Mr O’Brien, who the other two SEHB employees he had had “in mind” last year were when he spoke about the October 1996 decision.

Mr O’Brien said these had been referred to in a report on the case, by consultant Conal Devine, as H7 and H12.

Ms Connolly then referred him to the Devine report, where it is stated: “The inquiry team would also be of the view that the decision taken at the October case conference to effectively reverse the outcome of the April case conference was taken by professionals concerned including the H7, H6 and H4.”

There was “no mention of H12” in the Devine report’s account of the 1996 decision, said Ms Connolly. “Is H6 working for Tusla?” she asked.

Mr O’Brien said H6 was working “in the public service”, but to identify where might identify them.

Ms Connolly, referring again to the Devine report, said H6 had, in a professionals’ meeting on Grace in February 2001, advised: “Previous allegations were dealt with and cannot now be resurrected as grounds to justify any decisions made in relation to planning for [Grace’s] long-term care.”

Catherine Murphy TD (Social Democrats), asked whether any disciplinary action had been taken against personnel involved in Grace’s case. Mr O’Brien said a disciplinary process had been instigated which was identifying who may be disciplined.

Mr O’Brien was also asked about why he told the committee last year that gardaí would not allow the HSE to publish two reports on the case - the Devine and the Resilience Ireland reports.

It has since emerged the HSE only sought clearance from gardaí to publish in early 2015 – three years after the Devine report was completed. Mr O’Brien said in fact it was standard practise in the HSE not to publish a report on a case where there was an active Garda investigation.

1 Fatal police shooting in Kentucky cuts to heart of community divisions
2 ‘Summer is not lost’ - Taoiseach announces accelerated easing of coronavirus restrictions
3 Coronavirus: People to be allowed to travel anywhere in their county from Monday
4 Pubs reopening will not mean ‘fellas having a few pints and peanuts’, Holohan warns
5 Donald Trump is in trouble, and that could spell very bad news
Real news has value SUBSCRIBE