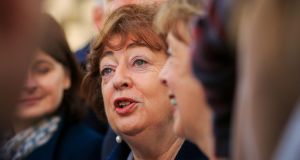 Social Democrats joint leader Catherine Murphy: ‘I don’t think it is the type of government people told us they wanted.’ Photograph: Gareth Chaney/Collins

Catherine Murphy, joint leader of the Social Democrats, has said she is unlikely to serve in a government that included Fine Gael and Fianna Fáil, although others in the party said they would not rule anything out yet.

Referring to the prospect of an administration involving both Fianna Fáil and Fine Gael, Ms Murphy said: “It isn’t the kind of government we would want and I don’t think it is the type of government people told us they wanted.”

The Social Democrats have six TDs and have been involved in talks with various parties.

Some Fianna Fáil TDs said the Greens may need to give a definitive signal within weeks on which government option they favoured: either pursuing a left-wing government with Sinn Féin, or opting to enter coalition with Fianna Fáil and Fine Gael.

However, this was dismissed by senior Fianna Fáil figures who said there would be no such pressure on the Greens.

But Fianna Fáil sources said it was necessary to convince other parties, such as the Greens, that Fianna Fáil would not enter government with Ms McDonald.

In a sign of the tensions within Fianna Fáil, a number of party sources said frontbenchers had raised the prospect of changing leader before entering government, although this was not seen as a credible option.

“What we are trying to do is make it more about the issues and that will put it up to the others, including those on the left,” he said, adding that this would make it more difficult for left-wing parties to join a Fianna Fáil-Fine Gael coalition.