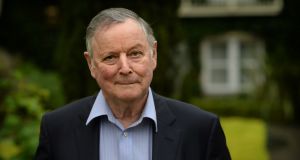 John de Chastelain in Dublin. “The public wished to see the instruments of their pain being dismantled in a such a way that they could say, ‘well. now we know it is all done’.” Photograph: Dara Mac Dónaill

The former head of the body responsible for decommissioning paramilitary weapons in Northern Ireland is concerned by the political vacuum left by the still incomplete resolution to the decades-long Troubles.

John de Chastelain, one of the international peace brokers whose work led to the 1998 Belfast Agreement, says that it was never a “hard and fast political solution” to all the problems facing Northern Ireland, but rather a “blueprint” showing what should happen with a lot more work required to make it happen.

“My great regret is that more than 20 years after the agreement was brought into effect there are still those who are seeking to use violence to change what is achieved, particularly when a whole new generation of people who weren’t alive during the Troubles are now voting.

“What can they vote for if the Assembly is not in office, and it has been two years now that the Assembly has not been providing the government and the leadership in the North that the agreement was all about?”

Sitting in a Dublin hotel ahead of a visit later this week to Dundalk Institute of Technology where a library is being named in his honour, the soft-spoken retired soldier still monitors Irish affairs closely despite relinquishing his role as chairman of the Independent International Commission on Decommissioning in 2011.

The recent killing of journalist Lyra McKee in Derry prompted feelings of sadness and regret for the 81-year-old former diplomat.

The continuation of violence hasn’t altogether surprised me, but I would have thought that this long after the agreement – 21 years – that those issues would have subsided

“It was a tragedy that a very able young woman lost her life like that,” said de Chastelain of the killing of the 29-year-old by dissident republicans during rioting after police searches in the Creggan estate.

He acknowledges that not all elements of militant republicanism – notably the Real IRA – bought into the 1998 peace agreement and paramilitary groups operated in “a very distributive system”, so it was impossible to guarantee that “all” the North’s guns were decommissioned.

“The continuation of violence hasn’t altogether surprised me, but I would have thought that this long after the agreement – 21 years – that those issues would have subsided.”

De Chastelain is as puzzled as many others at the remarks made by the “New IRA” – the dissident republican group that has admitted killing McKee – that her death did not further its “cause”.

“The spokesman for the group that were responsible for the death of this young woman made the point that they recognised they had no public support and that violence will never change the circumstance of the political divide, so I have to ask myself: what is the point of continuing?”

The Canadian clings to the one positive development that might emerge from McKee’s killing: that the two main political parties, the DUP and Sinn Féin, will restart talks that might lead to the restoration of Northern Ireland’s power-sharing executive which was dissolved in January 2017.

De Chastelain sees the UK’s departure from the European Union and not knowing exactly how Brexit will affect Ireland and Britain afterwards as “troubling” for Northern Ireland. Any hardening of the Border because of Brexit “would be a tremendous shame”, he says.

“One of the key aspects of the Belfast Agreement was in fact that the Border was open, and for those who chafed at the prospect of there being two jurisdictions – one on either side of the Border – that was much less of a problem since the Border was opened. I would hope that it would stay that way.”

He declines to say whether he thinks Brexit should happen or not, but admits to having a personal interest in the debate given his long-time role in the peace process. He shares the general frustration of those struggling to figure out how the UK parliament will proceed, and what it means for the Border.

“Everybody is on edge because they don’t know how this is going to work out. Once the decision is taken, whenever that will be, then I think, hopefully, wiser heads will prevail, and it won’t affect the two-way movement between the Republic and the North.”

De Chastelain is upbeat about the potential for the Border and “a burgeoning place” like the Dundalk Institute of Technology because it draws students from both sides of the Border.

His involvement with Dundalk comes from his connection with the Ireland Park Foundation, a Toronto-based arts, culture and heritage charitable foundation, and its chairman, the Irish-Canadian businessman Robert Kearns. The two men shared interest in the 19th century politician and journalist Thomas D’Arcy McGee, one of the fathers of the Canadian Confederation who was born in nearby Carlingford, Co Louth.

De Chastelain puts his work in Northern Ireland “right at the top” of a storied career that included leading Canada’s armed forces and serving as his country’s ambassador to the United States.

Monitoring decommissioning was one of his toughest roles. “The public wished to see the instruments of their pain being dismantled in a such a way that they could say, ‘well. now we know it is all done’,” says de Chastelain, but there was “no way” the paramilitaries were going to allow it be seen as an act of surrender.

He smiles recalling how his initial assignment in Northern Ireland in 1995 was intended to last two months before he was sucked into the decommissioning body. “It wasn’t until 15 years later that I went home.”