Waterford teen and underage Irish soccer international, Tega Agberhiere (16), is recovering from a suspected acid attack and is now expecting to regain full sight in both his eyes. Video: WLR FM 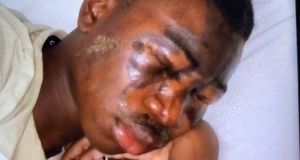 Tega Agberhiere (17), an underage Irish soccer international who suffered serious injuries during an attack last in which gardaí said a ‘corrosive substance’ was used. Photograph: Damian Tiernan via Twitter

Gardaí believe drain-cleaning fluid may have used in an attack on a number of teenagers in Co Waterford last week.

The incident occurred in the Earlscourt housing estate on the Dunmore Road at around 11pm last Thursday.

Gardaí said a number of youths were involved in a “serious altercation”, and it is understood “a corrosive substance” was used.

Four male teenagers arrested on Saturday have been released without charge.

Gardaí said a file is being prepared for the Director for Public Prosecutions (DPP) and that the investigation is ongoing.

Tega Agberhiere (16), an underage Irish soccer international, and two of his friends were allegedly splashed with a corrosive liquid during the altercation.

There was speculation the liquid might have been from a car battery but gardaí believe now that it could have been drain cleaning fluid. “It’s some sort of acid,” a garda familiar with the investigation said on Tuesday.

Republic of Ireland senior manager Mick McCarthy, Under 17 national team manager Colin O’Brien and Under 16 coach Paul Osam were among those to send messages of support to Tega and his two friends.

“I know Tega is a very promising young footballer and I hope and pray that he is back on the pitch in the very near future. My best wishes to Tega, to his friends and to their families,” said McCarthy.

Taoiseach Leo Varadkar, speaking in Waterford on Tuesday, said he was “really horrified” by the incident.

“It’s the kind of thing you hear about happening in other countries. I don’t recall it happening any time in Ireland any time recently.

“The people who were responsible will face the full rigours of the law and I’d really encourage anyone at all who has information to come forward because nobody wants to see that kind of thing happening in our country.”

Gardaí are trying to establish a motive for what happened and are hoping to get more information when the victims of the assault are in a position to be fully interviewed. The incident is not believed to have been racially motivated.

Tega plays for Waterford FC’s under-17 side and has represented Ireland at underage level. He was born in Waterford and is studying for the Leaving Certificate at Waterpark College.

His parents are originally from Nigeria and moved to Ireland in 2002. His mother, Christie, said her son suffered first-degree burns on his face and was continuing to receive treatment in hospital.

He was transferred to Cork University Hospital on Tuesday morning.

“I’m angry, I’m not happy about the whole thing because it shouldn’t have happened to anybody,” she told RTÉ’s Morning Ireland.

Ms Agberhiere said her son was preparing for his Leaving Certificate and has had football trials with a number of clubs in the United Kingdom.

“It has affected the whole community. . . . It’s really shocking, I’m in shock. I’m still in shock. Even an adult, emotionally, you would be damaged,” she added. “As a mother, I have to lift his spirit and make him positive.”

Padraig Sullivan, who plays underage hurling for Waterford, also sustained injuries to both legs and will need skin grafts . A third boy in the group sustained back injuries.