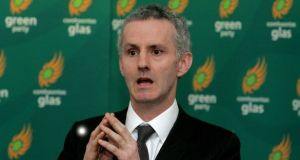 Speaking at the announcement of his candidacy in the European elections, Ciarán Cuffe said: “I want Dublin to be known for its walkability, bikeability and liveability.”

Green Party candidate in the upcoming European elections Cllr Ciarán Cuffe has said he is confident of securing a seat in the Dublin constituency despite a crowded field, particularly on the left of the political spectrum.

There are now 19 candidates for three seats (four after Brexit) in the Dublin constituency.

Speaking at his campaign launch, Cllr Cuffe said the European elections will be the “climate change election” and he was the candidate best-placed to represent Dublin on the environmental issue in Europe.

“I want Dublin to be known for its walkability, bikeability and liveability,” he said.

Cllr Cuffe said he will be campaigning to take cars out of Dame Street, Capel Street and South Great George’s Street “creating a living city with cleaner air and more space for people”.

The former junior minister in the Fianna Fáil/Green Party administration said he would look to Europe for a housing package for Dublin that would help build A-rated new homes and retrofit homes in the city to a modern standard.

Green Party leader Eamon Ryan said the “market-led approach in a market that is broken” to the housing crisis by Fine Gael “has to change”.

Mr Ryan said the European Elections in Dublin will partially be a referendum on the Government’s approach to housing with 17,000 households on the waiting list in Dublin and 10,000 homeless across the country. He anticipated the electorate will give Fine Gael a “bloody nose” over housing.

“I’m in a state of despair with this Government,” Mr Ryan said. “They are failing miserably. They have no vision for the future. Their approach on housing is deeply damaging for the country. It has to change.

“We have been using our private member’s time in the Dáil to look at cost rental because cost rental is the key to unlocking a different future for housing in Dublin which is public, affordable and brings down the market price.”

Following the launch Cllr Cuffe brought his Dutch Green colleague Bas Eickhout MEP on a bus tour of central Dublin and the Docklands area, highlighting areas where the European Parliament could act.

Cllr Cuffe said there would only be one incumbent MEP in the Dublin constituency, Sinn Féin’s Lynn Boylan, as the other two current MEPs, Brian Hayes of Fine Gael and Independent Nessa Childers, are not seeking re-election.