MLA replaces David Simpson, who decided not to run again after extramarital affair 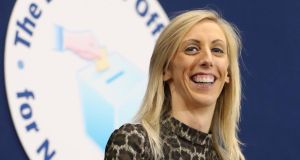 Carla Lockhart of the DUP after being elected MP for Upper Bann. Photograph: Niall Carson/PA Wire

On a bruising election night for the DUP, Carla Lockhart brought the party some smiles as she returned a solid victory in Upper Bann.

This was the 34-year-old’s first Westminster election; an MLA in the area since 2016, she was drafted in as candidate after David Simpson, who had been the Upper Bann MP since 2005, announced he would not stand again following an extramarital affair.

In the event, Lockhart slightly increased the DUP’s margin of victory, defeating Sinn Féin’s John O’Dowd by 8,210 votes, just over 200 more than Simpson polled against him in the last UK general election, in 2017.

After her victory Ms Lockhart thanked God and her predecessor, whom she said she would lean on for guidance in the times ahead.

“I am extremely humbled that 20,501 people put their trust in me as their DUP MP for Upper Bann,” she said. “I ran a positive campaign. While others sought to dig from the sidelines, I campaigned on a record of delivery for Upper Bann. I stand on my record of delivery, and the people of Upper Bann embraced that. To my family, who see me on good and bad days, I want to thank them for their prayers on my political journey.”

She also thanked her baby son, Charlie, who at less than a year old was the youngest supporter of any election candidate at the count in Meadowbank Sports Arena, in Magherafelt, Co Derry. “I believe this will make me a better person, and it’s for his future, for all our children and grandchildren going forward. I will represent everyone to the best of my ability.”

With turnout in Upper Bann broadly similar to 2017 – it fell by about 0.9 per cent – Eóin Tennyson was yet another Alliance Party candidate to deliver a strong performance. He increased his party’s vote by more than 4,000, taking Alliance to third place in the constituency, with 6,433 votes, more than 200 votes ahead of the UUP’s Doug Beattie, who dropped almost 2,000 votes. The SDLP’s Dolores Kelly broadly held the party’s position, with 4,623.