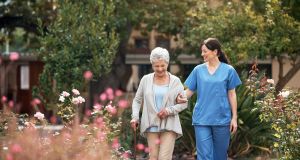 The Comptroller’s report recommends changes to the HSE’s approach in a number of cases to dealing with the contribution of residents to the cost of their care under the scheme. File photograph: iStock

The weekly cost of accommodating a person in a publicly-run nursing home under the “Fair Deal" scheme is over 60 per cent higher than in a private facility, a new report by the Comptroller and Auditor General has found.

The special report published on Monday also revealed that residents in private nursing homes were more likely to incur charges for additional services than those in the public system.

The Comptroller’s report also recommends changes to the HSE’s approach in a number of cases to dealing with the contribution of residents to the cost of their care under the scheme.

The Comptroller’s report says by 2018 the “Fair Deal” scheme was supporting more than 23,000 people with the cost of their nursing home care. The HSE paid out €969 million with an additional €343 million provided to nursing homes in 2018 in the form of residents’ contributions. There are about 550 nursing homes covered by the scheme with about 80 per cent in the private and voluntary sector.

“In 2018, the average charge rate for public nursing homes was €1,564 a week. The agreed average maximum price chargeable for private or voluntary homes was €968 a week. The difference was 62 per cent. However, because the methods used to determine the weekly rates are different for each sector, a meaningful comparison of the charge rates is difficult.”

* better pay and conditions for staff in public nursing homes, including the

* higher costs associated with older buildings used as nursing homes, which typically were not purpose-built for long-term residential care

However, the report says the HSE has not undertaken formal analysis of these cost drivers.

Nursing Homes Ireland said on Monday that the report highlights ”a scheme that requires urgent reform and is inherently unfair for private and voluntary nursing homes”.

The Comptroller’s report says that both public and private nursing homes provide a range of goods and services not covered by the scheme such as access to social programmes or transportation to appointments.

The Comptroller’s team carried out a review of 12 contracts with residents, six in the public system and six in the private/voluntary system.

The report says, for example, in five of the six private/voluntary sector contracts reviewed there were references to a change in fees if a resident’s dependency level changes.

The sample study also found additional charges in the private/voluntary sector for the provision of additional incontinence wear.

“The HSE provides a supply of incontinence wear free of charge to eligible people both in the community and in residential settings (public and private). A clinical decision as to a person’s necessity for products, and a determination of the number of pads required per day is made, on a case-by-case basis, by a HSE continence advisor or public health nurse. It is HSE policy not to levy charges in cases when a resident of a public nursing home requires additional incontinence wear. In private nursing homes, the cost of required additional incontinence wear is typically passed on to the resident.”

details of their income and assets to the HSE together with supporting documentary evidence. However it says the HSE does not specify the nature of the

documentary evidence required for many types of income and assets, or how recent that evidence should be.

A sample study carried out found that the majority of applicants were receiving Department of Social Protection income supports .

“For 41 of these cases, Department of Employment Affairs and Social Protection (DEASP)system (Infosys) containing information on welfare payments made to individuals, marital status and previous employment status, was available in the local HSE office. The examination found evidence that DEASP’s system had been checked by HSE staff in just under half of these cases.

“A rate change in the State pension will impact the amount an individual pays towards their cost of care. The examination found that following a rate change, each individual’s contribution must be manually re-calculated by the HSE. Between 2015 and 2018, there have been three such pension rate changes. The examination team analysed information from the HSE’s IT system, as at February 2018, to determine whether pension rates had been adjusted accordingly and in a timely way. It was found that there were over 2,200 instances where rates of pension had not been adjusted and the contribution to care had therefore not been re-calculated. This represented about 10 per cent of the cases in payment at the time.”