‘We can be fined how much?’ Shoppers mask up in Dublin city centre 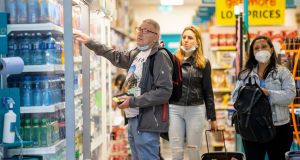 There was almost universal compliance in Dublin’s city centre on Monday morning with new rules which make the wearing of face coverings in shops mandatory although many of those in step with the regulations appeared to be protecting little more than their chins as they went about their business.

Bill Mooney from Tenterfields in the heart of the Liberties was one of those who had his mask on correctly as he strode up Henry Street, only occasionally leaning on his walking stick for support.

He celebrated his 90th birthday at the start of June and was full throated in his support of the new rules. “It is something very simple that people have to stick to now and it is great. It keeps everyone a bit safer and is something we have to do,” he said.

He said he had come into town to get an issue with his smartphone addressed and while the level of customer service he had received had left him fuming, he was pretty relaxed about the impact of the Covid-19 pandemic on his life so far.

“I am one of those guys who can sit back and relax and look after my wife while she looks after me,” he said. “I was born in 1930 and my parents lived through the Spanish flu but they never talked about it, they just got on with things back then and that’s what we have to do too.”

From Monday face coverings are mandatory in shops and other indoor public settings such as hairdressers and museums. Those in breach of the rules can be fined up to €2,500 or face six months’ imprisonment.

The entrance to Penney’s was being policed by stern-faced security staff with face visors and masks and while they were managing the queues and ensuring social distancing, they were not enforcing the new rules. “It’s up to the customers,” one staff member said.

“If the guards catch them without the masks there is a fine and we are advising them of that but we are not refusing anyone admission because they don’t have a mask. That is not our job.”

There appeared to be no issue in the shop, however, and across the three floors at midday every single shopper had a mask on although several had them draped casually around their necks rather than over their mouths and noses.

Outside the retail giant’s main door stood Kate and Val Day from Baldoyle who had come into the city centre for a stroll. Both were wearing their reusable masks.

The amount of disposable masks that I have seen thrown on the ground? It is just disgusting

“I have no problem with it, it has to be done and we have been wearing them for a while already,” Kate said. “We took the bus in to town and most people were wearing them but I did see a guy who had clipped his off after he had go on the bus. I wouldn’t challenge him, though, it’s not worth it. He was just one person.”

Her sister Val was more concerned with what people were doing with the masks once they had finished complying with the new rules. “I am using a reusable masks and I can wash them but the amount of disposable masks that I have seen thrown on the ground? It is just disgusting.”

Ger Poole from Darndale was pretty chilled as he walked up the street in his black reusable mask. “I don’t mind it at all really although it does fog up my glasses,” he said. “I prefer the reusable ones because I wouldn’t want to be buying them all the time.”

“I’ve sold a few of them,” Martin Fox said cagily when asked how business was.

“I don’t know what it’s all about at all mind you. You can go down the road Slattery’s and get all the pints you want and no one will ask you to wear a mask but if you want to go in to Top Shop then you have to have a mask on? How does that make sense?”

Another thing he couldn’t see much sense in was how his trade was being continually interrupted.

“The guards won’t let me sell the masks and are seizing them off me. On the one hand they are taking them off me and on the other then are insisting people wear them. It’s mad. I could get the virus selling the masks or I could save somebody’s life selling them.”

Denise Dunne and Billy Dunne from Lucan were also wearing their masks and seemed pretty pleased to be able to shop in Dublin’s city centre with them on. “We’re getting used to them and I’m happy that they’ve introduced the new rule,” Denise said. “We can see the fields of Kildare from our house so we escaped the lockdown by the skin of our teeth.”

While for many the wearing of masks was a straightforward decision for others it was considerably more complex. “She has special needs and won’t wear one, she won’t put it near her face no matter what we do. We were trying to put it on her to keep her safe,” Lyndsey Hatton from Dunard in Dublin 7 said gesturing towards her sister Casey standing by her side.

Lyndsey had a face covering on herself. “I don’t like wearing them either and I wouldn’t be wearing it today if I didn’t have to,” she admitted.

In a Dealz shop a group of young women browsed. One was wearing a mask while her two friends were maskless. When asked about their absence and reminded of the new rules, they responded with shock. “Oh my God I didn’t know it was the rules,” one said. “We can be fined how much?” asked the other as she rooted in her bag to see if there was a mask there.

As he spoke, the mask covered just his mouth. “I know I am not wearing it right but when it covers my nose my glasses fog up and this is better than nothing, isn’t it?”