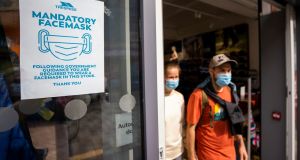 Sign advising customers at Trespass store in Belfast that the wearing of face masks is mandatory. Photograph: Liam McBurney/PA Wire

One more person has died with coronavirus in Northern Ireland, the first such fatality recorded by its Department of Health in almost a month.

The death was reported by the department on Monday but took place in hospital on August 8th.

The total number of fatalities recorded by the department now stands at 557.

The Minister for Health, Robin Swann, warned people against “complacency” and sent his “deepest condolences” to the family and friends of the person who died.

“This is very distressing news and it underlines once again the threat posed by Covid-19,” he said.

The department’s figures include only patients who have tested positive for Covid-19.

Separate figures released by the Northern Ireland Statistics and Research Agency (Nisra) on Friday, which cover all fatalities which include coronavirus on the death certificate, noted one death in the week ending July 31st.

Figures released by the department on Monday also showed 76 new cases of Covid-19 were confirmed over the weekend.

The number of cases of the virus has been rising over the last week. A total of 165 people have tested positive for the virus in the last seven days, compared with 89 the previous week.

Belfast reported the highest number of cases in the last week, with 37 people testing positive for the virus. In the Newry, Mourne and Down district 29 cases were identified, and there were 28 in Mid and East Antrim.

Meanwhile, the wearing of face coverings in shops and other enclosed spaces indoors became mandatory in Northern Ireland on Monday.

Children under 13 and those who are unable to wear a mask for health or disability reasons are exempt, but those who do not wear a mask without a reasonable excuse will be liable for a fine of £60 (€67).

In a joint statement, the Northern Executive said the wearing of face coverings was a “vital defence in our battle against Covid-19”.

“This is about looking after each other and doing everything we can to stay on top of this virus. It will help to save lives.”

Jennifer Taylor, the marketing manager at the Richmond Shopping Centre in Derry, said the majority of customers on Monday were complying with the regulations.

“We understand people are going to come in with exemptions to the masks, and we won’t force anybody to give proof that they should be exempt,” she said.

Fertility services also resumed on Monday at the North’s Regional Fertility Centre (RFC). The eligibility for anyone currently on the waiting list will be extended by a year, in recognition of the disruption to the service caused by Covid-19.

Since the beginning of the coronavirus outbreak 158,666 people have been tested for Covid-19 in Northern Ireland, and 6,140 have tested positive for the virus.

Three people are currently receiving hospital treatment, and two are in intensive care. There are active outbreaks in two care homes.

Northern Ireland records two sets of data on coronavirus fatalities. The figures released daily by the department are based on patients who have previously tested positive for Covid-19.

Nisra releases weekly figures which are based on information entered on death certificates completed by medical professionals, whether or not there was a positive test for the virus.

The number of coronavirus-related deaths recorded by Nisra until the week to the end of July was 855.