‘The Waterford Greenway has transformed this county. There is no doubt about that’ 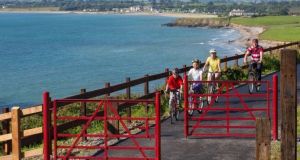 The attraction, developed at a cost of €15 million, has transformed tourism in the county, according Waterford chief executive officer Michael Walsh

The Waterford Greenway has taken first prize in a national competition aimed at encouraging community initiatives.

The Waterford Greenway scooped gold for the Best Tourism Initiative in the All Ireland Community and Council Awards organised by Local Authorities Members Association and iPB Insurance while it also took a Grand Prix Award for 2018.

The attraction, developed at a cost of €15 million, has transformed tourism in the county, according Waterford chief executive officer Michael Walsh.

Speaking at the presentation ceremony at Croke Park Mr Walsh said the success of the 46km long walk and cycle way, which opened fully last March, was a credit to both council staff who maintain it and local communities who support it.

“Some counties and communities talk about being self-sufficient, about providing local employment, enhancing their natural resources for their economic, social and cultural benefit and for generations to come. We’ve developed the Greenway and they have come - in their droves,” he said.

“The Waterford Greenway has transformed this county. There is no doubt about that. The economic benefits are evident everywhere you go - coffee shops, hotels and other accommodation providers, bars, shops, restaurants, bike hire companies and more all reporting a boom in trade.”

The Waterford Greenway, which crosses eleven bridges as it runs from Waterford city along the route of the old Waterford to Mallow railway line to Dungarvan, last year attracted almost 250,000 visitors including more than 105,000 walkers and more than 141,000 cyclists.

Among its attractions are the River Suir, Mount Congreve gardens, viaducts at Durrow and Kilmacthomas, Ballyvoyle Tunnel and stunning views of Dungarvan Bay which, along with the way that local communities have embraced the amenity, has ensured its success, said Mr Walsh.

“The real winners are the people of Waterford who have been such great Greenway ambassadors as well as the families, the groups, the individuals who use our Greenway again and again and who are reaping the health and wellbeing benefits. That will be its true legacy, I believe,” he said.

Trails officer with Waterford City and County Council, Johnny Brunnock, said it had been “an incredible ten months” for everyone associated with the Greenway and the award was a great boost to all involved in developing the project.

“The economic, social, sporting and other benefits that the Greenway has brought are simply unbelievable. It’s brilliant to see so many local people, visiting families, adult groups, clubs and societies using the Greenway and spending time in Waterford,” he said