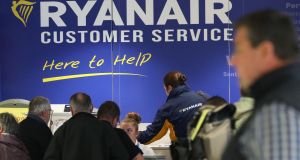 Ryanair’s seating policy for people who chose not to pay for allocated seats is likely to come under the spotlight again in the weeks ahead after the Civil Aviation Authority in the UK announced plans to review airlines’ policies to see if some are deliberately splitting travelling companions up.

Last summer The Irish Times started documenting the experiences of some Ryanair passengers who complained about being seated apart from friends and family if they declined to pay for allocated seating.

People who contacted this newspaper said that - unlike previous occasions when they had flown with the airline - if they did not pay for allocated seating they were being routinely separated from travelling companions even on flights on which many free seats were available.

Affected passengers suggested that the reason why the airline had suddenly started splitting up travelling companions was to encourage more people to pay for pre-booked seats in order to ensure they were able to sit together.

The airline flatly denied it had changed the way it allocated its seats, but the story grew wings and a handful of complaints turned into thousands with people across Europe saying their travelling parties had also been split up regardless of when they checked in and how many seats were available on their aircraft.

Now the British Civil Aviation Authority (CAA) is to carry out a review into airlines’ seating policies, including whether some operators are deliberating splitting up groups of passengers travelling together.

“We will be looking into how airlines decide where to seat passengers that have booked as part of a group and whether any airlines are pro-actively splitting up groups of passengers when, in fact, they could be sat together,” said CAA Chief Executive Andrew Haines.

“We will not hesitate to take any necessary enforcement action should it be required at the end of the review.”

The aviation authority in the UK has long had a fractious relationship with Ryanair and the review could open up a fresh dispute between the two.

As it announced details of the review, a survey of passengers from 10 airlines conducted by pollster YouGov indicated that people who fly with Ryanair are most likely to report being separated from their group when not paying more to sit together.

Ryanair said it was happy to participate with the review. “Our policy is very clear for our customers and seats can be purchased from just 2 euros and kids travelling in families get free seats,” said a spokeswoman.

Rival easyJet also also said it would cooperate with the review and took the opportunity to have a dig at Ryanair.

“Unlike some airlines, if passengers choose not to pay to select their seats, easyjet’s seating system is programmed to try and seat families together when they check-in online by using an algorithm,” the airline said in a statement.