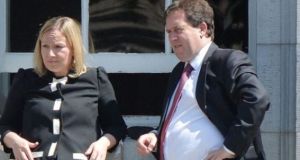 Taoiseach Leo Varadkar has shown far greater political maturity in his handling of the abortion issue than Enda Kenny, according to a former Fine Gael senator expelled from the party by Mr Kenny.

Former senator Paul Bradford from North Cork was expelled from Fine Gael along with his wife, Lucinda Creighton when they voted against the Protection of Life in Pregnancy Bill in July 2013.

The couple were among seven members of the Fine Gael parliamentary party who were expelled when they defied a party whip and voted against the bill in the Dáil and Seanad.

Mr Bradford has welcomed the approach being adopted by Mr Varadkar who has said Fine Gael will allow dissent on any vote to repeal the Eighth Amendment on abortion.

“I welcome the more mature politics from Leo because matters of conscience should never be a matter of whip in politics – that’s the way it is internationally and it should be no different here.”

Mr Bradford said he believed Mr Kenny had given in to pressure from Labour to impose a whip on the vote in 2013 and that was why seven members of Fine Gael were expelled.

Mr Varadkar is on the record since his election as party leader as saying that Fine Gael is “a broad church” and should be “be a warm house for people who have socially conservative views”.

Mr Bradford said it was heartening to hear such views from Mr Varadkar and while he revealed he recently had a lengthy conversation with the Fine Gael leader, he has no plans to rejoin the party.

The former senator also dismissed suggestions that Fine Gael was looking at recruiting him to run for the party in Cork East where he previously held a Dáil seat for Fine Gael from 1989 until 2002.

“I heard the rumour myself. I got a call from someone two weeks ago to tell me that it was not only a done rumour but it was a done deal, signed, sealed and delivered but that’s not the case,” he said.

“Yes, I did meet Leo at a wedding and we talked about politics - from Donald Trump to Theresa May to Leo Varadkar and various issues - but I’ve received no official approach from any one in Fine Gael.

“Two individuals mentioned the possibility to me but it’s not going to happen. I won’t be rejoining Fine Gael to run in Cork East but good luck to whoever it is that does run for the party there.”