Varadkar will seek to extend FG-FF government deal by summer 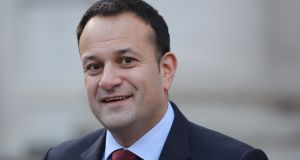 Taoiseach Leo Varadkar will seek to extend the confidence and supply agreement with Fianna Fáil weeks after the abortion referendum and months before the next budget.

Numerous Fine Gael sources have said their intention is to approach Fianna Fáil leader Micheál Martin in the aftermath of the referendum, due to take place in late May or June, and before the Dáil summer recess in mid-July.

The period between the referendum and the Dáil rising for summer is seen by Fine Gael as the “natural window” in which to seek to extend the confidence and supply agreement, which is due to conclude after the October budget.

If Fianna Fáil does not to discuss extending the agreement at that point, Fine Gael sources said, negotiations could again be attempted in September or October around the same time as the budget negotiations.

Such a scenario could see Budget 2019 become the first package of an extended deal rather than the last of the current agreement.

Fianna Fáil sources are hostile to the idea, however, which increases the likelihood of a number of bitter rows as the current deal reaches its conclusion.

Some figures in both parties say a failure to reach agreement on the final budget – when there will be an estimated €3 billion to spend – would provide an opportunity to hold an election and put alternative proposals before the electorate.

One Fine Gael source suggested Mr Martin might be keen to renew the agreement if Fianna Fáil was behind Fine Gael in the polls.

A Fianna Fáil source suggested Fine Gael was more interested in “provoking rows and seeking reactions rather than talking about what they are actually doing”.

Fianna Fáil figures reacted negatively to Mr Varadkar’s suggestion last month that the confidence and supply deal may be extended, although he did not say when moves would begin to do so. The Taoiseach said he does not want to see the deal “drop dead” on budget night.

“It would not be in the best interests of the country certainly to have a government on budget night with a confidence and supply agreement but not the day after,” he said last month. “So I imagine that conversation will be had at some stage next year.”

Mr Martin and his frontbench TDs have repeatedly said they want progress in the areas of health and housing before they even consider extending the deal.

Mr Martin said he would not give Fine Gael a “blank cheque”, and his party is set to roll out a number of its own policies, such as in housing, over the coming months in preparation for its general election manifesto.

Most Fianna Fáil TDs do not envisage the agreement being extended, but there is no clarity on how and when the deal will actually conclude.

The deal says “both parties to this agreement will review this Framework Agreement at the end of 2018”.

“Delivery is key, and there is a review at the end of 2018,” said a Fianna Fáil source. “It’s in black and white. It may surprise Fine Gael that a lot of people believe more should and can be done in service delivery.”