Oireachtas set to back repeal of Eighth Amendment, survey shows 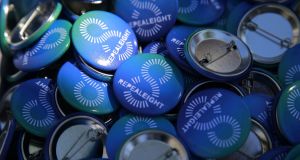 Almost half of all TDs (46%) are in favour of repealing the Eighth Amendment, while 15% said they are opposed. Photograph: Nick Bradshaw

Oireachtas members look set to back the repeal of the Eighth Amendment and a likely Dáil vote is on course to pass with a large majority, according to a survey of TDs and Senators.

With the Government moving towards seeking Dáil approval for an abortion referendum this summer, The Irish Times asked all Oireachtas members if they favoured a repeal of the amendment, which underpins Ireland’s strict anti-abortion laws.

Almost half of all TDs (46 per cent) are in favour of repeal, while 15 per cent said they are opposed. The remainder either did not respond or said they had not yet decided.

Thirty-one of Fine Gael’s 50 TDs are undeclared, but of those who stated a position – either in response to questions this week or in previous statements on their position – there is large majority in favour of repeal. Sixteen TDs are in favour, with just three opposed.

Fianna Fáil is the only party where a majority of TDs who have declared their position are against repeal.

Twenty-three of the party’s 44 TDs did not declare their views, but of the 21 who stated their position, 15 are against repeal and six in favour.

Labour, Green, People before Profit/Solidarity and Social Democrat TDs are unanimously in favour of repeal while among Sinn Féin TDs, just Peadar Tóibín said he would vote against it.

Of the 23 remaining Independent and small party TDs, 12 back repeal, with five opposed and six undeclared.

When the aggregate numbers are looked at, 73 TDs say they are in favour of repeal, with 15 per cent against. At this point, 38 per cent are undeclared.

Senators who declared their position are also overwhelmingly in favour of repealing the Eighth Amendment, with 45 per cent in favour, against just 5 per cent opposed. Half of all senators did not express a preference, or did not respond.

The Dáil is to discuss the abortion issue for three days next week, when TDs will consider the report of the Oireachtas Committee on the Eighth Amendment.

Meanwhile, The Irish Times understands that Taoiseach Leo Varadkar will seek to extend the confidence and supply agreement with Fianna Fáil just weeks after the abortion referendum and months before the next budget.

Fine Gael sources have said their intention is to approach Fianna Fáil leader Micheál Martin in the aftermath of the referendum, due to take place in late May or June, and before the Dáil summer recess in mid-July.

The period between the referendum and the Dáil rising for summer is seen by Fine Gael as the “natural window” in which to seek to extend the deal, which is due to conclude after the October budget.

If Fianna Fáil does not agree to discuss extending the agreement at that point, Fine Gael sources said, negotiations could again be attempted in September or October, in tandem with budget talks.