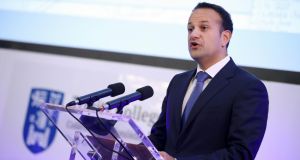 Taoiseach Leo Varadkar said in a video posted on Twitter on Wednesday it was important that Ireland continued to develop motorways linking cities such as Cork, Limerick and Galway so that all roads “do not lead to Dublin.” Photograph: Maxwells

Fine Gael Senator Jerry Buttimer has welcomed confirmation by Taoiseach Leo Varadkar that the Government is committed to the building of the Cork-Limerick motorway over the coming years to complete the Atlantic Corridor running from Galway to Cork.

Speaking in advance of the opening of the new N17/N18 Tuam to Gort motorway, Mr Varadkar said in a video posted on Twitter on Wednesday it was important that the State continued to develop motorways linking cities such as Cork, Limerick and Galway so that all roads “do not lead to Dublin”.

“It’s part of a future Atlantic Corridor which is going to link the entire western seaboard so with this in place we are now going to have a motorway linking Galway to Clare and on to Limerick and in due course we will link Limerick to Cork as well,” he said.

Mr Varadkar said the Government would before Christmas set out its 10-year capital plan for infrastructure leading to speculation that the long-promised Cork-Limerick motorway linking the second and third cities of the State is set for inclusion in it.

Mr Buttimer warmly welcomed Mr Varadkar’s comments as indicating the Government’s commitment to delivering on the motorway which was last costed by Transport Infrastructure Ireland (TII) as requiring an investment by the Government of about €850 million.

“I very much welcome the positivity of the Taoiseach’s comments about the Cork-Limerick motorway and certainly it needs to be included in the Capital Development Plan which will be published in the coming weeks,” he said.

“It’s a vital piece of infrastructure that hasn’t been delivered yet and its importance to Cork in terms of linking it to the western seaboard can’t be overstated ... and we need to see it started and delivered now as quickly as possible,” he added.

Mr Buttimer said that it addition to the economic benefits it would generate for both Cork and Limerick in terms of reduced travel times, there was also the added benefit it would bring in terms of improved road safety as the existing N20 had seen some terrible tragedies in terms of road deaths.

“Motorways are generally seen as making for much safer road travel and given the number of fatalities that we have seen on the Cork-Mallow and Cork-Limerick road over the years from a human perspective, completing the M20 will be a major improvement for all road users.”

Prior to the economic downturn the National Roads Authority, now part of TII, had looked at a number of routes for the M20 depending on whether they went east or west of Mallow, Buttevant and Charleville in Co Cork, with all options going west of Croom in Co Limerick.

The selected route submitted for planning, east of Mallow and Buttevant but west of Charleville, would have required the compulsory purchase of 16 residences and a total of 905 hectares affecting 235 farms and about 247 other properties.

The motorway along this route would have involved the construction of 44 new road bridges, eight major river bridges, a number of smaller water crossings and two railway crossings, as well as 64km of local roads including national, regional, local and private-access roads.