Abortion on demand would not follow repeal of Eighth Amendment - lawyer 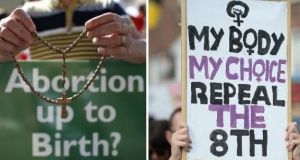 Mary O’Toole SC said trying to put complex provisions into the Constitution was “just simply impossible” as it was very difficult to get very complex ideas into a couple of sentences.

The repeal of Article 40.3.3 of the constitution would not bring about “abortion on demand in Ireland”, the Oireachtas committee examining the Eighth Amendment has heard.

Mary O’Toole SC was responding to a question from Fine Gael backbencher Peter Fitzpatrick, who asked for legal opinion on the matter after claiming 100,000 people were alive in Ireland today as a “direct result” of the amendment.

Ms O’Toole was a member of the expert group established in 2012 to examine options available to Government on how to implement a European Court of Human Rights ruling on abortion.

Earlier, Ms O’Toole said the Eighth Amendment had ended up meaning something different to what a lot of people who were voting on the issue thought it meant.

She said trying to put complex provisions into the Constitution was “just simply impossible” as it was very difficult to get very complex ideas into a couple of sentences.

She said other aspects of care of women had been “captured” within the remit of the amendment, citing the example of the case of a clinically brain dead pregnant woman eventually taken off life support during Christmas week in 2014 because there was no genuine prospect of her baby being born alive.

“It seems to have succeeded in its substantial aim which was to preserve decisions about life and death in these matters to the Irish people and to exclude judicial and political elites from changing matters as they often had done without public consultation in many countries,” he said.

In a tense moment, Mr Mullen was critical of the contribution of Professor Fiona de Londras, chair of global legal studies at Birmingham Law School, saying she appeared to be incapable of using the term “unborn”.

“We were not to be having advocacy here today, we were supposed to be getting informed opinion,” he said.

Responding, Prof de Londras said she was “agnostic” about what term was used. “Foetal life, unborn life, prenatal life, I’m happy to use any of those...I don’t have any problem with using a different word.”

Prof de Londras, Ms O’Toole and Dr David Kenny, assistant professor of law at Trinity College, Dublin, had made presentations on the legal consequences of retaining, repealing or amending the Eighth Amendment.

Prof de Londras has said a “simple repeal” of the amendment or repealing it and replacing it with a “negative provision”, making clear nothing in the Constitution would prohibit abortion as regulated by law, would bring about “reasonable levels” of legal certainty.

Independents4Change TD Clare Daly said the committee was unlikely to be able to reach a position of complete legal certainty in its deliberations.

“The level of certainly we are seeking here is a holy grail. It’s not to be found,” she said.

The committee is tasked with considering the report of the Citizens’ Assembly and formulating a wording for a referendum, expected to take place in May or June next year.

Fianna Fáil TD Billy Kelleher questioned the legal experts about the possibility of draft legislation being published in tandem with the referendum question.

“If we are to ask the Irish people to amend or replace or repeal and we are saying the Oireachtas may legislate, our record to date hasn’t been great.”

Ms O’Toole said if a referendum was held and a Bill published, it would “seem like political suicide” not to proceed. “But that’s not a legal view,” she added.