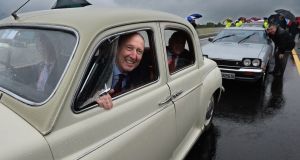 Minister for Transport Shane Ross opts for a 1959 Rover 100 to try out the new motorway. Photograph: Ray Ryan 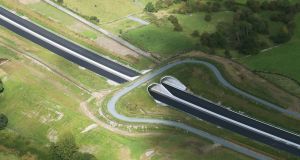 Wishing you were on that N17 is a feeling that will likely linger for those making the journey on the main carriageway from north to south Co Galway in days to come.

One can now swap stone walls and green grass for a four-lane highway linking the Saw Doctors’ home town of Tuam with Gort and on to Shannon airport.

The State’s latest motorway – the M17 between Gort and Tuam – was opened by Minister for Transport Shane Ross on Wednesday.

Built at a cost of €550 million, the 53km motorway, which was completed five months ahead of schedule, will form part of the “Atlantic corridor” which will eventually link Sligo to Cork.

It includes the State’s first “bat bridge” which will allow bats and other mammals to traverse safely near Lady Gregory’s home of Coole Park. The design draws on the Canadian experience of protecting moose populations, and aims to ensure the lesser horseshoe bat will use its important roosting site in Kiltartan cave and feeding grounds in Coole Garryland.

Mr Ross was one of two Ministers, a Minister of State, a former junior minister, a Senator and a number of councillors at the opening. He described the motorway as a “huge boost” for the western seaboard area.

The road is motorway standard on a stretch of 53.2km from Gort to the Kilmore junction near Tuam, and a dual-carriageway for 4.2 km from the Kilmore roundabout to the Mountpotter roundabout north of Tuam.

It also links to the M6 Dublin-Galway route at the Rathmorrissy junction east of Oranmore.

Mr Ross said he hoped it would contribute to saving many lives.He also said he also hoped the Tuam-based Saw Doctors would rename their “N17” song about emigration as the “M17” – with parents this time driving on the new motorway to Shannon to collect their returning emigrant children.

Minister for Rural and Community Development Michael Ring paid tribute to former taoiseach Enda Kenny and former public expenditure minister Brendan Howlin for persisting with a government decision to build the road. It was one of three public-private partnership projects to survive a cull of schemes in 2012.

Mr Ring said he hoped to see the motorway “going left” as far as Claremorris and up to Sligo. To cheers, Mr Ring added that he hoped Mr Ross would support him in Government on this.

Minister of State for the Diaspora Ciaran Cannon paid tribute to two public servants – late Galway county council director of services for roads and transport Liam Gavin and council senior engineer Jack Eising – who had died before the project was completed.

He said the two had played an enormous part in its construction as a public-private partnership.

The motorway was blessed by Fr Benny McHale, Fr Brendan Kilcoyne and Rev John Godfrey, before it was opened to traffic.

When the Clarenbridge Oyster Festival opens next week, it will be the first time in years residents will not be dreading bumper-to-bumper traffic through the Galway village.

The new Gort-Tuam motorway relieves Clarenbridge, Kilcolgan and communities such as Ardrahan of constant traffic between Galway and Limerick and cuts the journey time between Gort and Tuam to 30 minutes.

As residents note, it also means south Mayo is now just two hours from the M50 in outer Dublin, as is north Clare.

However, Galway West Independent TD Noel Grealish has voiced concerns to Minister for Transport Shane Ross that the motorway may not give much relief to Claregalway on the existing N17.

There are fears it may also create a “Newlands Cross” type situation at the Coolagh roundabout in Castlegar, where the M6 meets Galway, with local politicians keen to see some movement on the controversial Galway bypass.

Tuam-based Fine Gael councillor Tom McHugh says the town has no fears about being bypassed, after years of bottlenecks.

However, south Galway farmers who had expressed concerns about the impact on the karst limestone area, prone to flooding, are apprehensive.

Ardrahan farmer Michael Kelly said his neighbours have had a very difficult year due to constant rain and residents were still dealing with the legacy of serious flooding in 2009 and 2015.

“The rains which fall into streams flowing through underground caverns here need to get to the sea, and who knows how the motorway will affect that,” he said.