Varadkar and May push for June deal to restore Stormont 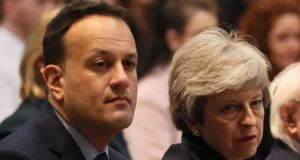 Taoiseach Leo Varadkar and British prime minister Theresa May have urged Northern Ireland’s five main parties to engage “substantively” on forging a deal to restore the Executive and Assembly.

On Sunday night Mr Varadkar and Mrs May gave their approval for the British and Irish governments and the parties to press ahead with concerted efforts through this month to strike a deal to restore the powersharing institutions.

“We believe it is imperative that the parties now move without delay to engaging substantively on the shape of a final agreement,” said Mr Varadkar and Mrs May in a joint statement issued on Sunday night.

They said they believed there was a “genuine but narrow” opportunity for reaching agreement ahead of the beginning of the marching season in July.

Tánaiste and Minister for Foreign Affairs Simon Coveney and Northern Secretary Karen Bradley will now lead “intensified” talks at Stormont beginning on Monday aimed at reinstating the Executive and Assembly.

All five parties said after round-table talks on Thursday that they were committed to reaching an agreement.

In their statement, Mr Varadkar and Ms May noted how Mr Coveney and Ms Bradley recommended to them that the talks should continue with the aim of finding an agreement before the end of June.

“We welcome the constructive engagement shown by all parties to date,” said the two leaders. “It is clear to us that the Northern Ireland political parties wish to see the institutions of the Belfast/Good Friday Agreement restored, but operating on a more credible and sustainable basis.”

Without referring to big hurdles such as an Irish-language act and same-sex marriage, they noted that key difficulties remained. “While broad consensus has been reached on some issues, other areas remain to be resolved,” they said.

After a month of talks that were triggered by the fatal shooting of Lyra McKee by the New IRA in Derry, the two governments and the five parties agreed that the mood at the negotiations was positive but now was the time to try to grasp the challenging issues such as the Irish language and gay marriage.

In advance of marching season, the difficulties over Brexit and the focus on the Conservatives choosing a new leader and prime minister, there is uncertainty over whether sufficient attention can be concentrated on achieving a deal.

“We have faced greater challenges in the past, and with generosity and imagination we have found a way forward,” she said. “Sinn Féin will enter the next phase of talks dedicated to reaching agreement and a route back to all-party powersharing.”