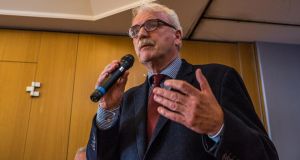 Minister of State for Disability Issues Finian McGrath said he would attend the Stand Up to Trump rally on Thursday at the Garden of Remembrance at Parnell Square. Photograph: James Forde

Government minister Finian McGrath has said he will attend a protest against Donald Trump during his trip to Ireland this week because the US president is a “threat to the world”.

The Minister of State for Disability Issues said he would attend the Stand Up to Trump rally on Thursday at the Garden of Remembrance at Parnell Square and would speak if asked to by organisers.

“I will be protesting against Trump and his policies, particularly his international policies in relation to climate change, equality issues and also to his attitude to people with disabilities,” the Independent minister said.

Mr Trump was widely criticised for mocking a New York Times reporter who has a chronic condition called arthrogryposis, which affects the movement of his arms, at a rally in South Carolina during his election campaign.

Mr McGrath’s fellow Independent Alliance minister John Halligan, who has also said he would protest against Mr Trump’s visit, could not be contacted for comment.

Minister for Transport Shane Ross previously said he disapproved of Mr Trump’s policies but had not decided how to register that disapproval. However, it is understood Mr Ross will be in Brussels on Wednesday and Thursday, missing the visit.

Mr McGrath said he was asked during his ministerial trip to Mexico and Cuba for the St Patrick’s Day celebrations in March to “bring back a message that those two countries totally abhorred the policies of Trump in relation to their countries”.

“I think he is a very, very severe threat both in the Middle East and towards Iran also. These are the issues I will be protesting about,” he added.

“Of course, I respect his right to visit our country and I know the Taoiseach is going to meet him, but my position as an Independent member of government is that I am totally opposed to his policies and I will be making my voice known at the protest on Thursday.”

The Minister said he had no opposition from Cabinet colleagues to his planned protest.

“Everybody knows my view in Cabinet,” he said. “It is widely accepted that I have a very strong position in relation to Trump and opposing his policies. I think he is a threat to the world, basically.”

Mr McGrath said he backed the views of the mayor of London Sadiq Khan reported over the weekend. Mr Khan compared the language used by Mr Trump to rally his supporters to that of “the fascists of the 20th century”.

Mr Trump and his wife Melania will be a guest of Queen Elizabeth during a three-day stay in London before he travels to Ireland.

Mr Khan said the US president was just “one of the most egregious examples of a growing global threat” as the far right rise around the world.

Meanwhile, a six-metre high orange blimp depicting President Trump as a “crybaby” in a nappy will fly over the Stand Up to Trump protest in Dublin, according to organisers. The inflatable was the focal point of demonstrations against Mr Trump in London in July last year, and was to come to Ireland for his planned trip last November before it was cancelled.