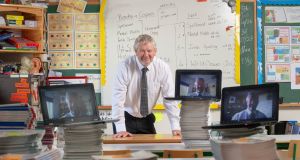 Teaching through a coronavirus pandemic has literally proven an education – and not just for pupils, according to one Co Cork primary school principal, who has seen his staff as much as his pupils develop during the lockdown.

Barth Harrington has been principal for the past 25 years at Scoil na mBuachailli in Clonakilty, which has 256 pupils and 19 staff. Nothing in his career prepared him for the challenges that Covid 19 brought.

“It was a nightmare in that we got no warning about the lockdown. We found out at lunchtime on March 12th, so I went around to all the teachers and told them to tell the boys to bring home as many books as possible.

The school already used a primary school software package called Aladdin to communicate with its students’ parents on their phone or laptop, and it quickly harnessed its potential to help teach.

The school also utilised two other software packages, Google Classroom and Class Dojo, and all the pupils worked with their teachers from home, sending in their homework via computers which was corrected and returned to them.

“For those apps the teacher doesn’t see the pupils, they just see the work they are doing. And that was fine for a while, but then we began to realise they are going to lose motivation, so we got on to Aladdin.

“We asked them – as I’m sure other schools did – if they could improve their software because their homework software was poor at the time. They listened and over Easter they upgraded their software and it was brilliant.

“We could send the children homework via the Aladdin app, the parents could send it back, we would get it corrected and send it back, and give them a star or say ‘well done’ so they were getting constant feedback.”

However, as the lockdown continued Harrington and his staff realised they needed to have greater interaction with their pupils. So they began to investigate Zoom, and quickly introduced it, with teachers using it to hold virtual classes.

“We started three times a day with our Early Intervention Class for boys with autism, but then worked up to the other classes. But we only zoomed in small groups – usually it was five or six pupils at a time.

“Initially things were fine because it was a novelty, but then things grew as we went along, and we kind of grew with it as well. And using Zoom made a huge difference because they had face-to-face contact and could see their friends. The classes weren’t just homework, there was teaching as well.

“Now we wouldn’t have achieved the same as you would in a classroom because you had smaller groups, and it was hard work with a lot more preparation.

“And the children embraced the technology even more than we as teachers did – a class would last 30-40 minutes, and then the teacher would go to another group. You couldn’t go any longer, you would be exhausted.

Working from home, Harrington lived with Zoom, spending up to two days a week on the videotelephony app on meetings with his staff and reviews of how they were managing and interacting with their students.

“The teachers all embraced it, and once they were getting feedback from the children it spurred them on to keep it going and it was very successful – I can honestly say I had no negative feedback whatsoever.”

He called some parents to ask why their children were not engaging, but once contact was made they bought into the process. Up to 25 of the school’s laptops were shared to ensure everyone could participate.

Grateful to all his staff and Jonathan Sweeney of the Department of Education, he said they asked pupils to write a song about Covid 19. Six original entries were judged by singer John Spillane and three local musicians.

Pupils were also asked to take pictures of themselves homeschooling, which they posted to the school. So far a 500-strong slideshow can be viewed by parents and children.

“I found the children were very resilient and the teachers were marvellous. Enthusiasm is the most important attribute in a teacher because you are trying to motivate the children all the time, but the staff really rose to the occasion.”