Val McDermid: ‘There will be a united Ireland within five years’ 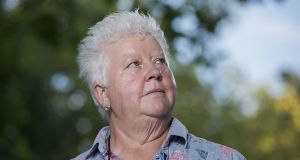 Val McDermid: ‘Scotland has become a modern, outward-looking nation at a time when England seems to have developed a frightening strand of the little-Englander world view.’ Photograph: Awakening/Getty

In the bookshops of Edinburgh, Val McDermid’s name is everywhere.

The award-winning crime writer’s books have sold 16 million copies and been translated into 40 languages. This month, her latest work, a “chilling” short story collection, Christmas Is Murder, fills bookshop windows.

McDermid is also a proud pro-independence Scot; her other titles include Imagine a Country, with her partner Jo Sharp, in which they asked a cross-section of Scottish voices to describe “a country you want to live in, a country you wish existed, a country where you’d feel truly at home”.

It was published in mid-March, just as the coronavirus pandemic took hold in Scotland. The year since, says McDermid, “has emphasised the differences between Scotland and the rest of the UK in many respects, and the frustrations felt by the Scottish government because of the reserved powers”.

She sums it up: “It feels like a shift.”

That movement in public opinion has been demonstrated at the polls, which since June have for the first time shown a consistent majority of about 54 per cent in support of an independent Scotland.

“Strategically, I don’t think Nicola Sturgeon will jump before she’s sure she’s got a majority that will be demonstrable in the case of the polls,” says McDermid. “I’ve heard her say that she never wants to wake up again on a morning like [the day after the independence referendum in] 2014.”

That said, McDermid predicts that next year’s elections in Scotland “will result in a thumping majority for the SNP [Scottish National Party] ... If they run on a mandate of independence it’s hard to argue against that as a mandate of the people, and if Westminster say no, arguably there’s nothing there but frustration and fury.

“That’s when I suppose, if it was me, I would start talking about a programme of civil disobedience, stuff like withholding your taxes, non-co-operation with the national authorities in all sorts of areas. Take your Trident home.”

Her hope is that the election will lead to another independence referendum, “which will be successful, which will win this time”.

This will have its consequences for Ireland, and for the union. “I don’t know which way round it will come but I think it’ll be the domino effect, whichever goes first will be the trigger for the other. Obviously I would prefer if it was Scotland going first.”

She believes there will be “a united Ireland, one way or another, within five years ... because I think Brexit’s going to destroy the union.

“The notion of having a border up the Irish Sea and pretending that somehow it’s okay and it doesn’t change anything, it’s manifest nonsense.”

McDermid is not an SNP member; she is, however, a friend of the Scottish First Minister – “I’d like to think so. She might think otherwise” – and praises her “presentational skill, obviously, but I think she’s genuinely a talented and intelligent politician”.

“One of the reasons why Scotland hasn’t on the face of it done better [in tackling coronavirus] ... has been in a large measure because our hands are tied in many areas. Where it has done better is in terms of national morale.

Sturgeon is a “genuine reader, she loves crime fiction”; McDermid notes that “the leaders who have performed most effectively in the Covid crisis all read fiction ... fiction promotes empathy.

“You can’t read a substantial amount of fiction and not understand how other people live. You can read any amount of political biography and not have a clue about how anybody else thinks.”

A lot of the opposition she sees targeted towards Sturgeon “is pure misogyny, the Jimmy Krankie stuff, the ‘nippy sweetie’ stuff. These are not the way they treat male politicians.”

Being gay in Scotland

“There are so many respects in which over the last 40 years we have changed. We have become a modern, outward-looking nation at a time when England seems to have developed a frightening strand of the little-Englander world view.”

In this context, the vibrancy of the arts scene in Scotland is “a reflection of how we see ourselves in the world now”; she sees Scottish writer Douglas Stuart’s recent Booker Prize win is “an amazing step forward”, and is encouraged by the diversity of Scottish voices.

“We have come to embrace the idea of what they call the new Scots, the idea that people who come here and cast their lot in with us are as entitled to call themselves Scottish if they join our communities and become part of us.”

While the “economic cake” post-independence may be smaller, “if you slice it differently it doesn’t necessarily mean an increase in poverty, it just means the people at the top of the tree dig a little bit deeper”.

She has sensed “a willingness to try and engage with the economic inequalities, to try and find levers that we can pull. Most of those levers are closed to us, but I think there’s a lot of people thinking about the future.”

For McDermid, it is an exciting time to be Scottish. “There’s genuinely a sense of openness,” she says.

“I’m not saying for a moment that Scotland is this great Nirvana, this great Shangri-la where everything will be lovely and the haggis will flow in the streets. We have our problems like any modern democracy, but I think the country we could become is better than the country we are at the moment.”