PSNI appeal for witnesses; victim taken to hospital for treatment for injuries 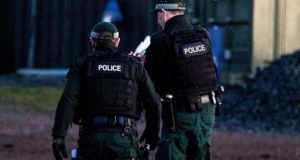 Detectives in Northern Ireland are appealing for witnesses after a man in his 30s was shot in both legs in west Belfast on Thursday night.

The PSNI believe the incident was a suspected paramilitary style assault.

Det Sgt Sam McCallum said police received a report at 8.10pm that a man in his 30s had been shot in both legs in the Downfine Walk area of west Belfast. The victim was taken to hospital for treatment of their injuries.

“Enquiries are continuing and at this stage, we are treating this shooting incident as a paramilitary style assault,” he said. “Those responsible for this barbaric act do not represent the interests of this community, nor do they contribute anything to it. They do it to try and exert influence, or gain control of those they claim to represent.

“An investigation is underway and I would urge anyone with any information to call detectives on 101 quoting reference number 1737 of 03/12/20.”

Information can also be given anonymously through the independent charity Crimestoppers on 0800 555 111.