US propaganda may have convinced Irish to enlist for WW1 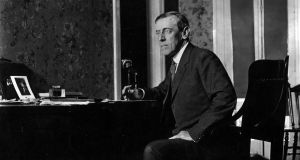 US president Woodrow Wilson set up the Committee on Public Information after the US declared war on Germany in April 1917.

A surprising upsurge in the recruitment of the Irish in the last months of the first World War may have been down to American propaganda, it has been claimed.

Between August and November 1918, almost 10,000 Irishmen joined the British armed forces. This was nearly twice the number that signed up between February and August of that year.

Irish recruitment was falling before the Easter Rising and the Rising exacerbated the decline, but the trend was reversed towards the end of the war.

Speaking at the Parnell Summer School, Prof Bernadette Whelan from the University of Limerick said many reasons have been advanced for the spike in recruits towards the end of the war.

The most common one was that many of those recruited were doing so because the British armed forces were promising to give new recruits a trade.

The impact of British propaganda has also been cited as a reason with continuing emphasis on the fact that the war was almost won.

Prof Whelan said the impact of American propaganda in Ireland in the last year of the war was considerable and may have swung a lot of Irish people who associated the war just with the British.

US president Woodrow Wilson set up the Committee on Public Information (CPI) after the country declared war on Germany in April 1917.

It originally had a branch based in London, but then set up in Dublin after the Americans became alarmed at the increasing anti-war sentiment in Ireland.

The CPI targeted Irish newspapers for much of 1918, emphasising the bravery of Irish-born and Irish-American troops. They also carried messages of support for the Allied war effort from Irish-American cardinals and other prominent Catholic clergy.

Prof Whelan said many Irish Republicans were bolstered by Wilson’s famous speech in April 1918 about making the world safe for democracy and that America would support the “rights and liberties of small nations”.

But it came as a “huge disappointment” that Wilson’s administration refused to recognise the first Dáil in January 1919 and that he did not raise the subject of Ireland at the Versailles peace conference.

He had also been told by his private secretary, the Irish-American Joe Tumulty, that he had raised expectations in Ireland in 1917 and 1918 that he would support Irish independence.

Prof Whelan said Wilson had been among the best-informed US presidents about Ireland and was an early supporter of Home Rule, but had made up his mind in 1914 that the Anglo-American relationship was more important.