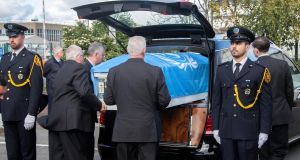 The mother of an Irish man who was killed after an Ethiopian Airlines flight crashed in March said she would like her son to be remembered as a caring person who worked to better the lives of many people.

Christine Ryan’s son Micheál Ryan, a married father-of-two from Lahinch in Co Clare, was two weeks short of his 40th birthday when he was one of 157 passengers on board an Ethiopian Airlines flight which crashed minutes after take off en route from Addis Ababa in Ethiopia to Nairobi, Kenya on March 10th, 2019.

The aircraft was a Boeing 737 Max and there were no survivors from the incident. Aviation regulators grounded this aircraft model after the crash. It was the second Boeing 737 Max aircraft to crash in the space of four months.

Speaking on RTÉ’s Today with Sean O’Rourke Show from Frankfurt airport where she was en route to Ireland from Addis Ababa with his remains, she said he was coming home as “a UN hero” because of “all the lives he has saved.”

Mrs Ryan said she and her son Tiernan flew to Ethiopia two days ago to bring Ryan’s remains back to Ireland. The 39-year-old deputy chief engineer with the United Nations World Food Programme had worked on projects in the developing world.

He was posthumously appointed chief engineer of the UN World Food Programme following the airline disaster.

The victims of the crash included a large number of aid workers and environmentalists who were travelling to the UN environment assembly which took place in Kenya last March.

The Ethiopian incident came just five months after a Boeing 737 Max operated by Lion Air crashed in Indonesia in October 2018 claiming the lives of 189 passengers and crew.

The Ryan family met representatives from the Ethiopian government and the United Nations and were brought to see the casket yesterday. “They are honouring him quite well,” she said.

Mrs Ryan said the experience had been emotionally draining, but it meant a great deal to her to be able to bring her son’s remains home.

UN personnel and Government representatives were due to meet the family at Dublin Airport and the remains are to be brought back to Ennistymon, Co Clare for a private burial later Tuesday. There had already been a public celebration of his life and the family wanted the burial to be private, she said.