Rail-riding pup reunited with owners after solo trip to Dublin

Oscar boarded the 7.30am train from Maynooth to Connolly Station 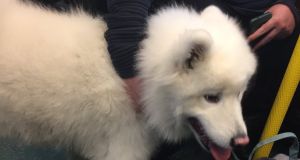 Irish Rail tweeted that lots of people were reporting the “friendly commuter” on board the early morning train. Photograph: Irish Rail Twitter account

A rail-riding pup who decided to go on a solo trip to the capital has been reunited with its owner, Irish Rail has said.

The dog, who is called Oscar, boarded the 7.30am train at Maynooth in Co Kildare and was en route to Dublin’s Connolly station on Tuesday morning.

Irish Rail tweeted that lots of people were reporting the “friendly commuter” on board the early morning train.

Lots of customers reporting this friendly commuter boarded the train at Maynooth this morning at 07.30hrs, and is now en route to Dublin Connolly - if you’re living in Maynooth and missing your dog, let us know! pic.twitter.com/27X2AnoysW

Oscar’s owners were alerted to his adventure through social media and arrived at the station in the capital to pick him up.

This is the third time this year that an adventurous dog has decided to take a solo trip.

In April of this year, a dog, temporarily-named Hamish by Irish Rail staff, journeyed from Kildare to Heuston on the Intercity route.

After an extensive online campaign and media coverage, Hamish, whose real name is Tyson, was reunited with his rightful owners.