Updated BusConnects plans to be published ahead of consultation 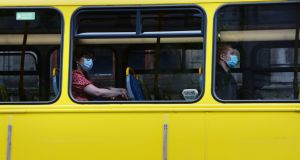 The latest BusConnects plans are due to be published by the National Transport Authority (NTA) on Wednesday and a further round of public consultation will begin.

The plans relate to the core bus corridors as opposed to the network redesign, the final version of which was published in September.

It is understood the latest plans will set out building 150 new protected intersections for cyclists, which would involve installing concrete islands at the corners of junctions. The plans are also understood to include increased island bus stops.

The consultation period is expected to run from November 4th until December 16th, with community forums being held online.

Kevin Baker, chairperson of Dublin Cycling Campaign, said the new protected intersections differ to those which have been successfully rolled out in the Netherlands and UK.

Mr Baker said the group is “broadly supportive” of the BusConnects project but concerned about the junctions, having seen some of the updated plans.

“In the UK and the Netherlands where they have these protected junctions, cyclists almost always have their own traffic lights . . . But in Dublin, what they’re proposing to do is not the international standard, instead the traffic lights for cars and traffic lights for bikes will run at the same time,” he told The Irish Times.

“We’re extremely concerned that the unproven junction design is not safe and instead the NTA should follow the international standard.”

The NTA did not respond to queries.

BusConnects aims to overhaul the current bus system in the Dublin region by creating 230km of dedicated bus lanes and 200km of cycle tracks along 16 of the busiest corridors and a redesign of the network.

Plans published in March set out that 2,449 trees would have to be felled and 776 properties would lose part of their front gardens to cater for the bus corridors.

The final plans are to be presented to An Bord Pleanála for statutory approval.