Highest case rates appear to be in newer suburbs 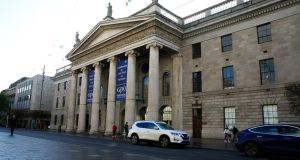 In many parts of the world, Covid-19 has cut a swathe through many urban centres, and it would be foolish to think Dublin and other Irish cities could escape this fate. Photograph: Gareth Chaney/Collins

Not for the first time in this pandemic, Dublin is emerging as the potential problem child of virus elimination.

On Monday, chief medical officer Dr Tony Holohan singled out the capital for its “stubbornly” high Covid-19 figures, his point borne out by the fact that Dublin accounted for 321 out of 767 cases (or 42 per cent) reported on the day.

Tuesday’s figures were more encouraging as 96 of the 322 latest cases (or 30 per cent) were in Dublin.

Amid otherwise positive trends nationally, public health officials are worried that Dublin may prove a more difficult nut to crack in terms of reducing case numbers.

So it was last month, when infections in Dublin started to rise again just three weeks after the introduction of Level 3 restrictions there on September 21st. Initially, the tighter restrictions seemed to be working as case numbers fell but this effect proved temporary and the upward trend resumed.

Spooked by this failure to flatten Dublin’s curve, the Government decided to accept the advice of public health officials and opt for Level 5 restrictions nationally later in October.

Our experience of this pandemic has shown that localised outbreaks of the virus outside the big cities are easier to contain, even when infection rates have soared. No amount of christenings and club championship celebrations in Border counties can obscure the fact that the population densities, and raw case numbers, involved are relatively low. This, and the dispersed nature of rural living, makes it easier to eventually hunt down the sources of the virus and contain it.

Earlier outbreaks in midland counties were linked to specific clusters in meat plants that could be specifically targeted for infection control measures.

In contrast, big cities, by their nature densely populated, often more deprived and with younger populations and higher immigration, are giant reservoirs of potential infection. In many parts of the world, Covid-19 has cut a swathe through many urban centres, and it would be foolish to think Dublin and other Irish cities could escape this fate.

Throughout the first months of the pandemic, Dublin accounted for about half of all cases in Ireland. This proportion fell as outbreaks occurred around the Border counties and in the midlands but now seems to be rising again as the situation outside the capital is brought under control.

It is hard to read much into the limited local data available but the highest case rates in Dublin appear to be in the newer suburbs in the west of the county. Public health officials have worked hard to minimise infections in at-risk groups and enjoyed a large measure of success in this work, at least until recently. Adherence to restrictions by the public is lower in Dublin than the rest of the country, but only slightly, surveys show.

It wouldn’t take a genius to suspect we may see a fresh bump in cases as a follow-on from Halloween festivities, which were subdued this year but not uniformly so. That impact should be temporary, though, and the overall fall in cases nationally should continue as impact of Level 5 restrictions, introduced on October 22nd, starts to be felt from next week.

However, the success of the lockdown will be decided ultimately by what happens in Dublin. That will be dependent of the implementation of an effective contract tracing system capable of tracking down the virus as quickly as possible after cases are identified.