Up to 500 march in support of Greyhound workers 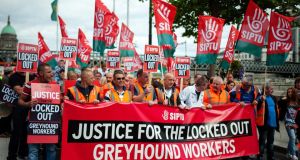 Greyhound workers and others march from Liberty Hall to Dublin City Hall in protest at pay cuts yesterday. Photograph: Collins

Up to 500 people marched from Liberty Hall to City Hall in Dublin yesterday evening in support of workers from waste company Greyhound who are in dispute with management over wage cuts.

Chants of “Scabs out, workers in” could be heard as waste collection crews, their families and supporters stopped traffic to highlight workers’ concerns after the company attempted to introduce wage cuts of up to 35 per cent.

At the end of May, the Labour Court found Greyhound’s cost base was not sustainable. It recommended both parties work together to identify “labour productivity savings” and “adjustments to the wage bill” to return the company to viability.

On June 17th, after two weeks of failed negotiations on cost-saving measures, the company asked workers to accept wage cuts of up to 35 per cent before they began their shift.

The workers refused, and the dispute began. Siptu has said security guards were put in place and its members were refused entry to the company plant at Knockmitten unless they agreed to the wage cuts.

The union has characterised the company’s actions as a lockout, while the company has said “collection crews refused to come to work” under the new wage conditions and took unofficial action.

Agency workers have since been engaged to carry out the work of the more than 70 men affected by the dispute and are being paid the reduced wage rate.

Siptu shop steward Jesse Hughes said this evening workers could not survive on the wages being proposed. “To cut our wages down to minimum wage is way too much,” he said. “We are asking councillors to support us in any way they can.”

He said staff, some of whom had been transferred from Dublin City Council to Greyhound following the privatisation of waste collection in the city, gave a nine-hour increase in their working week and had taken a pay freeze since 2008.

“The staff bought their houses in the good times, they can’t afford to pay their mortgages on the rates he’s asking and that’s what it comes down to really,” he said.

The union has asked customers of Greyhound to call the company to express their support for workers.

A spokesman for Greyhound said it wanted workers to return to work “under protest” on the reduced wage and they would then go to the Labour Court for a binding determination.

“These guys’ wages have been way out of kilter with the industry and even after these wage cuts they will still be 10 per cent above the industry average,” he said. He would not say what the new hourly rate was. The company has called on Dublin city councillors to urge workers to return to work.

Also last night, Siptu president Jack O’Connor called on Minister for Jobs Richard Bruton to establish a Government task force to review the current conditions of employment and other matters in the waste disposal industry.

‘Race to the bottom’

He said “a race to the bottom” was under way in the waste disposal industry and that the treatment of workers was “appalling to a degree that would not be tolerated in any developed economy or society”.

Mr O’Connor said the “overall situation in the waste management and domestic refuse collection and processing sector is deplorable”.