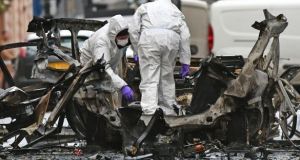 Forensic officers at the scene of the bomb attack on Derry Courthouse. Photograph: Colm Lenaghan/Pacemaker

Four of the five people arrested by police investigating a car bomb blast in Derry at the weekend have been released.

A fifth man (50) remains in custody in connection with the explosion outside the city’s courthouse on Saturday. Nobody was injured in the attack, which happened on Bishop Street at about 8.10pm.

The Police Service of Northern Ireland said four men - two aged 21, and others aged 34 and 42 - were released unconditionally on Monday night.

The investigation is continuing into the Derry car bomb which the PSNI believes a dissident republican group called ‘the New IRA’ was responsible for.

The street has since reopened following the explosion and the PSNI said investigators had completed an examination of the scene. It offered “a sincere word of thanks for the patience of all those impacted” by the incident.

CCTV from Saturday footage shows the car being abandoned outside the courthouse and a figure dressed in black running away. Armed and masked men had earlier hijacked the car, a Ford Fusion, from a pizza delivery driver in the Brandywell area of the city.

A bomb – described by police as a “crude and unstable device” – was put into the car and driven for half a mile through the city to the courthouse.

Assistant Chief Constable Mark Hamilton said the car was abandoned at about 7.23pm, and that shortly afterwards a call was received by the Samaritans in the English West Midlands warning of the bomb. That call was passed on to West Midlands police, who then passed it on to the PSNI. A patrol had already spotted the vehicle and had begun to evacuate the area. The bomb exploded at 8.09pm.

PSNI officers cut gates at the back of a youth club to allow 150 people – who were taking part in a charity quiz – to escape from the building on to the city’s walls. Other people were instructed to close doors and to move to the back of buildings.

A group of young people were recorded on CCTV making their way past the bomb about 20 minutes before it exploded.

In a statement, the dissident republican political party Saoradh linked the attack to the 100th anniversary of the Soloheadbeg ambush, which marked the beginning of the War of Independence.

The attack has been widely condemned. Secretary of State for Northern Ireland Karen Bradley said it had “rightly been met with utter condemnation from all parts of the community”.

Tánaiste Simon Coveney said there was “no place and no justification possible for such acts of terror, which seek to drag Northern Ireland back to violence and conflict”.

Minister for Justice Charlie Flanagan said the attack had been carried out against the people of Derry but also against communities across the island of Ireland who had enjoyed the results of the peace process for many years.

Security sources said the attack was a reminder of the continued threat from dissident republicans and voiced concern about the risk of further attacks if a hard border was introduced under Brexit.