Vehicles hijacked, van abandoned outside school and attempt made to take bus today 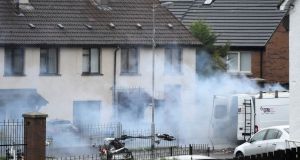 Army bomb disposal robots are seen next to a vehicle as a controlled explosion takes place at the scene of a security alert in Derry. Photograph: Clodagh Kilcoyne/Reuters

Police were responding to a number of security incidents in Derry on Monday night including a van being abandoned outside a school in suspicious circumstances.

The incidents have resulted in fresh disruption in the city after a car bomb exploding outside its’ courthouse on Saturday.

An Asda delivery van was left across Northland Road opposite St Mary’s College in the city on Monday night. Residents in Glenbank Road and Northland Road were either asked to leave their homes or told to move to the back of the properties.

Glen Development Initiative was opened as a rest centre for those who had to leave their homes. The Northland Road was cordoned off, and police advised people to avoid the area.

The principal of St Mary’s College, Marie Lindsay, said on Twitter that she was “devastated” to hear of the incident.

“We will update our school community later tonight when we have more details. Thinking of all those who are being evacuated from their homes.”

The Police Service of Northern Ireland (PSNI) later said that there had been an attempt to hijack a bus providing a local service in the Moss Road area of Galliagh.

In a statement posted on Facebook, the PSNI said: “We appreciate there is a lot happening in the city tonight folks. It’s important we have the right information out there.

“We can confirm there has been an attempted hijacking of a local bus service in the area of Moss Road. We are responding to these incidents with public safety remaining our top priority.”

Police established cordons and evacuated homes around both scenes as concern mounted about a possible new campaign by dissident republicans opposed to the peace process.

In the first incident, police said a white Ford Transit van was hijacked on the Circular Road at about 11.30am by three masked men, who threw an object into the back of the vehicle before abandoning it.

British army technical officers carried out a controlled explosion on the hijacked vehicle.

The PSNI then said it received a report that a delivery driver’s vehicle had been hijacked on Southway in the Creggan area of the city by four masked men just before 1.45pm. One of the men was reportedly armed with a gun.

“The two occupants in the van were ordered to drive the vehicle to the Lonemoor Road and leave it there,” said Supt Gordon McCalmont.

“We are in the process of implementing a public safety operation, establishing cordons and evacuating a number of homes.”

He added: “I know this second security alert and the measures we are taking to keep people safe will cause significant inconvenience for the local community, but we have no choice.

“I want to ask the public for their patience, and thank them for their co-operation while we work to make the scene safe.”

The community centre at Central Drive in the Creggan area was made available to those ordered to leave their homes.

Assistant Chief Constable of the PSNI Mark Hamilton said he has not seen anything that links Brexit to the bombing in Derry at the weekend or the hijackings on Monday. He also said there was no evidence to support speculation that the incidents are a response to the 100th anniversary of the War of Independence.

Mr Hamilton told RTÉ’s News at One there was no specific information to connect the car bomb and the hijacking incidents and that doing so would be purely speculation.

“I’ve seen nothing that links Brexit to any of these issues, the threat in Northern Ireland has remained severe since 2009, unfortunately there’s always some expectation that attacks could happen.

“I’m very concerned for the people of Derry. This afternoon people are going to be out of their homes, children getting out of school are not being able to get back to their homes, get their dinner, do their homework, all of the things that all of us reasonably expect to do.

“In the longer term we don’t want a sense of fear or uneasiness creeping into the community either here in Derry or across Northern Ireland.”