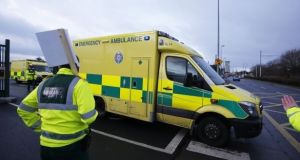 Ambulance staff are to stage a series of 24-hour strikes in a major escalation of their long-running campaign over trade union representation rights.

Members of the National Ambulance Service Representative Association (Nasra) will decide on the dates of the planned work stoppages at a meeting in early May.

The ambulance staff concerned, including paramedics, advanced paramedics and emergency medical technicians, have staged six strikes since the start of the year with the stoppages running from 7am to 5pm.

However at an extraordinary general meeting in Mullingar on Thursday members of Nasra decided to escalate their campaign by holding day-long strikes.

The move is likely to complicate contingency arrangements which HSE management has put in place to deal with stoppages up to now.

HSE managers with appropriate qualifications have been operating front line services while the Department of Defence has deployed military ambulances and crews.

Ambulance staff represented by Siptu have not been involved in the dispute.

Nasra is a branch of the Psychiatric Nurses Association (PNA) and has said it represents about 500 staff in the HSE’s National Ambulance Service including paramedics, advanced paramedics and emergency medical technicians.

However, the HSE does not recognise the PNA or its Nasra branch as a representative body for ambulance personnel.

PNA general secretary Peter Hughes said the move to 24-hour strikes represented “ a clear and determined message to the HSE that the resolve of ambulance personnel to win the right to be represented by PNA – a recognised trade union with over 40 years’ experience representing workers in healthcare – is undiminished”.

“Once again in the face of the HSE’s effort to force over 500 PNA ambulance branch members (including paramedics, advanced paramedics and emergency medical technicians) to give up their right to be members, and be represented by their trade union, our members must escalate their industrial action to secure a fundamental right available to workers throughout the country.”

“As this dispute moves to a more serious and disruptive level of industrial action it is time for politicians of all parties to demand that the HSE account for its actions in instigating a completely unnecessary dispute and its complete failure to address all efforts to resolve the dispute. The HSE must also be called to account for the clear waste of resources in its excessive use of legal and private ambulance services in its attempt to break this dispute.”

The HSE has strongly defended its stance in relation to recognising Nasra as a representative body for ambulance personnel over recent months.

“The National Ambulance Service recognises Siptu, Unite and Forsa for staff in the service. In particular Siptu is the recognised trade union for front-line staff.”

The HSE said “recognition of other associations or unions would undermine the positive engagement that exists and would impair good industrial relations in the National Ambulance Service”.

“It is a well-established principle of public policy that fragmentation of union representation in the public sector is not in the interests either of the public or of workers. For that reason where grades of employee already have strong representation rights – as is the case in the National Ambulance Service – it is not appropriate for employers to recognise break-away unions. Recognising break-away unions has a destabilising effect on good industrial relations.”