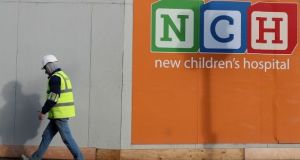 A spokesman for the HSE said none of the parties providing specialist input to the HSE in regard to the new National Children’s Hospital had any role in the subsequent decision-making process.

The Public Accounts Committee (PAC) is to question health officials over a “blatant conflict of interest” regarding reports into the national children’s hospital commissioned before and after a decision was made to continue with the project.

PriceWaterhouseCooper (PwC) was one of a number of bodies brought in to examine options for the future of the project last November. The following month, despite major cost overruns, the Government decided to proceed.

PwC was again hired in January by the Health Service Executive (HSE) to conduct a review of the cost overruns - a twofold involvement that the PAC has said constitutes a conflict requiring further explanation.

Speaking at Thursday’s hearing, committee chairman Seán Fleming said while PwC had no role in the decision to proceed, it had a “fundamental role” in feeding information into the decision making process.

“Two months later the same company was engaged by the HSE for, we all know, somewhere near €500,000, to examine the cost escalation - a gross conflict of interest as far as I am concerned,” he said.

Mr Fleming’s view was supported by PAC members and he said the committee would next month invite officials from the HSE and Department of Health to discuss its concerns.

Sinn Féin TD David Cullinane said it appeared PwC were “paid twice for the same advice . . . and the tax payer paid for it”.

In a letter to Mr Fleming ahead of the meeting, a spokesman for the HSE said it did not believe the issue constituted a conflict of interest.

“The HSE sought specialist high-level input from a range of health construction and procurement specialists including individuals from HSE Estates, PwC and the Northern Ireland Health and Social Care system,” he said.

“None of the parties providing specialist input to the HSE had any role in the subsequent decision-making process, the decision to proceed with Phase B was made by Government in December 2018.”

PwC was then commissioned in January by the HSE, on behalf of Government, to conduct a review of the escalation in costs and to identify potential weaknesses in the project. “In the context outlined above, the HSE is satisfied there is no conflict of interest,” the spokesman said.

Mr Fleming previously said Minister for Health Simon Harris must explain whether he had knowledge of the dual role of PwC and said the HSE had further questions to answer.

“Senior management in the HSE must now explain why they commissioned PwC to carry out the independent review into the escalation of costs after PwC had been earlier commissioned to provide specialist high level input to advise the decision making process,” he said.

“Was the Minister aware when PwC were given the second job that they were involved in the earlier advice given to Cabinet last December? If he wasn’t aware we want a clear explanation from the HSE.”