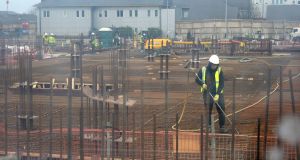 Some of the same PwC consultants who worked on the review of the overspend at the National Children’s Hospital advised the Health Service Executive before it decided to proceed with the project late in 2018, the Public Accounts Committee has heard.

However, the HSE has insisted that there was no conflict of interest arising from this, which was supported at the Public Accounts Committee by the Department of Health this morning.

The chair of the committee, Seán Fleming, has previously said that there appeared to be a “gross conflict of interest” arising from the arrangement. Mr Fleming read a letter from the HSE addressing the alleged conflict of interest into the Dáil record on Thursday morning, saying he wanted to balance out his previous remarks on the issue.

However, members of the PAC said that they were not satisfied with the explanation. Several said that the potential for the perception of, or for an actual conflict of interest still existed. “We can’t have the contestants judging the beauty pageant,” Fianna Fáil TD Marc MacSharry said. “What worries me even more is that the secretary general doesn’t see a conflict of interest”.

Sinn Féin TD David Cullinane said that the HSE letter suggested “a lack of understanding at best as to what constitutes a conflict of interest,” which he said “has to be completely at arm’s length”. “It’s a slam dunk, in terms of a clear conflict of interest, not even managed by the department or the HSE,” he said.

Catherine Murphy, the Social Democrats TD for Kildare North, asked “are we seriously being asked to accept that people were going to be asked to disagree with themselves . . . this is nonsense. It’s almost like we’re being made eejits of,” she said.

Paul Quinn, the senior civil servant who sits on the board for the National Children’s Hospital, defended his actions in not telling Cabinet Ministers or the heads of departments about looming cost overruns at the project as they emerged last year.

“I would have been precluded and not only in reach of my obligations as a board member but also in breach of law if I were to report to the secretary-general or the Minister,” he said. He said that it was “quite clear” that the board was addressing the issue and “communicating the issues” to a steering group.

“It defies all logic and responsibility that you must keep [the] omnishambles going off the rails here a secret from the Department of Public Expenditure and Reform, ” Mr MacSharry said, adding that the law preventing Mr Quinn from informing the departments of health or public expenditure about cost overruns “needs to be changed”.