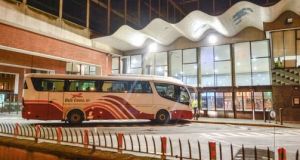 The NBRU says there will have to be many changes to public transport, particularly at peak times, to accommodate passenger numbers within social distancing rules. Photograph: Getty Images

Transport workers want the planned multibillion euro Dublin Metro and the BusConnects plan to be scrapped, and to be replaced by a number of lower-cost alternative projects due to Covid-19.

In a letter to the leaders of the main political parties the National Bus and Rail Union (NBRU) said in the new Covid world planning for future transport needs should be based on what was achievable and not on what was desired.

The union said there would have to be many changes to public transport, particularly at peak times, to accommodate passenger numbers within social distancing rules.

“We simply cannot return to a scenario in which capacity was overstretched. Kick-starting the economy will require lateral thinking and the introduction of measures and actions that will both alleviate the pressure on transport and obviate the requirement for large sectors of the workforce to use public transport in the short to medium term.”

It also suggested that starting times in the workplace could be restructured, and new financial incentives for working from home could be put in place.

The NBRU said the country should look at how available resources could be used to develop a number of different public transport projects rather than place all the money “roulette- style” on big ticket projects such as the the €4 billion to €5 billion Metrolink in Dublin and the € 2 billion BusConnects programme.

“This type of investment – if still attainable – should perhaps be looked at through the prism of what bang we could get for our buck if we looked at [alternatives].”

The union suggested these could include a DART line spur to Dublin airport, bus rapid transit systems to Swords, Finglas and Glasnevin in Dublin as well as in Cork, Limerick and Galway, the reopening of the Navan rail line, completion of the Western Rail corridor and development of a tunnel between Connolly and Heuston stations and the provision of cycling and walking space in cities.

NBRU general secretary Dermot O’Leary said on Tuesday that the fear of transport workers was that “a return to pre-virus practices will result in buses and trains becoming incubators for this virus or other such viruses that may follow”.