‘Unedifying’ week in Stormont as parties row over lockdown extension

Agreement eventually reached, but not before a deluge of acrimony and rancour 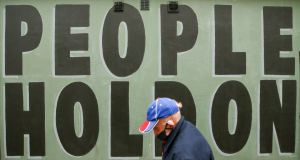 ‘There is now a decision and what we need to do is tell the public what that decision is and ask the public again to try to work with us.’ Photograph: Jonathan Porter/PressEye

She was referring to an on-air wrangle between the Sinn Féin and DUP representatives sent out to bat for their respective parties as the increasingly acrimonious row within the North’s Executive over whether or not to extend the existing “circuit breaker” lockdown spilled over onto the airwaves.

At the risk of stating the obvious, this is not without precedent in Northern Ireland. “We’re in the midst of this typical chaotic spat, really,” was how Crawley summed it up.

“Shitshow” was the more industrial language employed by one Stormont source to sum up the week.

That, certainly, was the feeling of many watching, not least business owners in the hospitality and so-called “close contact” sectors who called repeatedly for certainty over whether they would be able to open this weekend. As another day passed without agreement, a small group of hairdressers gathered outside Stormont in the rain holding placards: “We want answers.”

The answers came, eventually, on Thursday evening when it was agreed the current restrictions would continue for another week followed by a phased reopening.

These earlier papers were from Dodds – suggesting a phased reopening of the relevant sectors – and from the Minister for Health, the Ulster Unionist Robin Swann, requesting a one-week extension, his fall-back position after an initial paper on Monday advocating a two-week extension was blocked by the DUP.

The DUP’s use of a contentious Stormont mechanism – a cross-community vote – to effectively veto both Swann’s proposals angered the other parties, who all supported the two-week extension which the chief medical officer was clear was needed to avoid “excess deaths”.

The DUP, for its part, said there had been the basis of agreement last weekend and accused Sinn Féin of “somersaulting”, citing as proof a BBC interview with the Deputy First Minister, Michelle O’Neill, on Sunday in which she said the Executive was considering ways of “opening things up perhaps without alcohol”.

DUP sources are adamant Sinn Féin changed direction under instruction from Dublin, which was uncomfortable with the party appearing to advocate a different strategy North compared to South – a claim which Sinn Féin is equally adamant is without foundation.

Sinn Féin sources accused the DUP of deflection. “We always said any movement had to be based on medical advice,” a senior source said.

All of this added up to tense and sometimes angry exchanges at the Executive table. It was reported that at one stage on Thursday Arlene Foster told her Sinn Féin counterparts: “I won’t be taking any lectures from Sinn Féin on excess deaths.”

All the while the clock ticked down to what industry, politicians and the public at large understood to be a cliff-edge deadline at midnight on Thursday, when the relevant legislation would simply fall away without a deal. The clarification – by the Department of Health following legal advice that the deadline was really Friday midnight – felt like a fitting coda to the week.

“This week has not been edifying, I don’t think, for anybody,” Ms O’Neill told the BBC after agreement was eventually reached on Thursday evening. That said, she emphasised, “there is now a decision and what we need to do is tell the public what that decision is and ask the public again to try to work with us.”

Others were less diplomatic. The SDLP MLA Matthew O’Toole on Twitter accused the DUP of using a public health crisis as “an opportunity to create yet another haggling spectacle in order to satisfy the backwoodsmen”; Alliance and the Ulster Unionist Party made clear they had supported Dodds’s proposal only to avoid a cliff-edge scenario on Friday night.

Yet government in the North is based on a five-party mandatory coalition, as was frequently remarked on this week. “We are well used to having to get on with it,” was how one politician put it.

Further pressure points will lie ahead, not least in regard to Christmas, and what might happen once this new deadline expires.

Already looking ahead was Naomi Long. A repeat of this “debacle” in two weeks’ time “would be unconscionable. It is now incumbent on us all to ensure that will not happen.”