Mother, father and son die of Covid-19 within a fortnight 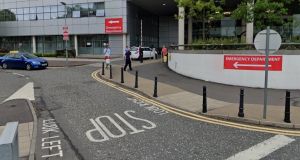 Tony Doherty, who died of Covid-19 within a fortnight of his parents, was from west Belfast and worked at the Royal Victoria Hospital (pictured) in the city. Image: Google Streetview.

Three members of a family have died from Covid-19 within a fortnight.

Tony Doherty, a married man in his 50s, died on Wednesday after being sick with Covid-19. His mother, Angela and father, Owen died on October 29th and November 1st respectively also from the disease.

Mr Doherty lived in Banbridge, Co Down and was from west Belfast. He worked at the Royal Victoria Hospital in Belfast.

The Belfast Health and Social Care Trust said he worked with its patient and client support services. The trust posted a statement describing him as a “valued member of our team, but more importantly, he was our friend.”

The statement added: “Tony was a larger than life figure with a heart of gold who made an instant and lasting impression on everyone he met. We all shared many laughs and good times with Tony and we hope these memories can provide some comfort to everyone in the days and weeks ahead.”

Jim Brady, a former colleague of his, said Mr Doherty had been a porter in the hospital.

“I worked with Tony for over 15 years in the Royal, then the Belfast Trust. He was a dedicated worker and a great guy full of fun never let the team down in the old post room then in the portering team. During major incidents he never declined any request I asked of him,” he posted on Facebook.

Mr Doherty is survived by his wife Deborah his son Conor, brothers Owen, Stephen and Kieran and sister Sinead.

His funeral takes place on Saturday after requiem mass to St Patrick’s Church, Dromore Street in Banbridge with burial afterwards to Milltown cemetery.