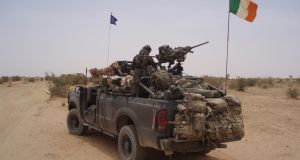 The UN has suspended the rotation home of more than 400 Irish peacekeepers deployed in Lebanon and Mali in a bid to stem the spread of coronavirus.

However, the Irish Government may ask that Irish troops be exempted from the order which applies to all countries contributing troops to peacekeeping operations globally.

The order means 380 peacekeeping troops in Lebanon and 13 members of the Army Ranger Wing deployed on an anti-terrorism mission in Mali could have their homecoming delayed until at least June 30th.

It may also affect much smaller Defence Forces contingents in Congo and Western Sahara and 12 gardaí serving with the UN peacekeeping force in Cyprus.

On Tuesday, United Nations secretary general Antonio Guterres announced peacekeepers on mission would not return home until June 30th, even if their tours end before then. The deployment of new troops will also be delayed. The aim is to prevent troops carrying the virus home to their countries and replacement troops carrying it to mission areas.

“Our peacekeeping missions are working full-time to contain and mitigate the spread of Covid-19. Our priorities are to ensure the Covid-19-free status of incoming uniformed personnel, and mitigate the risk that UN peacekeepers could be a contagion vector and simultaneously maintain our operational capabilities,” a spokeswoman for Mr Guterres said.

Irish troops in Lebanon on the Unifil mission are due to be replaced at the end of May, meaning they face an extra month on mission. The 13 ARW members in Mali were due to rotate home at the end of April, meaning their tour may be extended for two months.

“The department and the Defence Forces are currently examining the implications of the UN decision on those rotations,” a Department of Defence spokeswoman said.

“There is ongoing engagement within the mission and with mission commanders to ensure that rotations can take place as close as possible to the original planned dates in accordance with the direction of the UN secretary general.”

The Defence Forces said no final decision had been made on the Irish side and officials were considering whether to make a request that Irish troops be exempted from the order.

A spokesman said a decision would be made shortly as to whether Ireland would comply with the UN order or ask for an exemption.

The UN has said exemptions may be considered on a country-by-country basis.

“A few, limited exceptions may be considered,” a UN spokeswoman said. “But only in extenuating circumstances on the basis of strict conditions to prevent the spread of the virus,”

The UN has confirmed all troops on extended missions will continue to be paid the standard peacekeeping allowance.

The order will not affect the 122 troops from the 60th Infantry Group serving with the Undof mission in the Golan Heights in Syria. Soldiers from the mission returned home on Saturday and were replaced by a contingent which will remain in Syria for the next six months.

The returning troops are in a two-week period of self-isolation. Most are at home with families but a small number with relatives vulnerable to Covid-19 have moved into barracks for the duration.