Three FF contenders want the job, which will be filled after a new government is formed 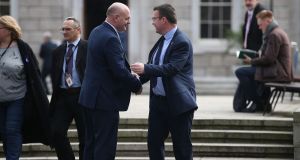 Senator Diarmuid Wilson (left) with Labour Party leader Alan Kelly. Mr Wilson is viewed as the frontrunner to be the next cathaoirleach of the Seanad. Photograph: Nick Bradshaw

The campaign has begun for the €114,130 job of cathaoirleach of the Seanad.

Fianna Fáil Senators Mark Daly and Diarmuid Wilson and outgoing chair Denis O’Donovan are all interested in the position, which is likely to be in Fianna Fáil’s gift if, as expected, party leader Micheál Martin is the first to lead a new coalition government.

The position will only be filled when the new Seanad sits, which will not happen until a government is formed. This will be mid-May at the earliest but could be much later.

Mr Wilson (54), who is based in Co Cavan, is viewed as the front-runner for the position. He is the third-longest-serving member of the Seanad after father of the House David Norris and former cathaoirleach Paddy Burke of Fine Gael.

Mr Wilson said he was asked by colleagues to consider running, particularly as Fianna Fáil had won 16 seats, the highest number of any party and two more than in 2016. He has been the party’s chief whip since 2007 and is well respected across all groupings in the House. He is a member of the British-Irish Parliamentary Assembly and a nephew of former Fianna Fáil tánaiste and Cavan-Monaghan TD John Wilson.

Mr O’Donovan (65), who is based in Schull, Co Cork, was well regarded for his work as chair of the last Seanad and is seeking an unprecedented second term in the role. He first served as a taoiseach’s nominee from 1989 to 1993 and was a TD from 2002 to 2007 before later returning to the Seanad.

The campaign for the role was sparked when Co Kerry-based Mr Daly (47) announced his campaign in the local media.

The only Senator to be elected to the vocational panels on the first count, Mr Daly was first elected in 2007 and is a regular visitor to the US, where he campaigns for residency rights for Irish emigrants. He is not close to the party’s leadership.

The Cathaoirleach position includes a top-up of €46,019 to a senator’s €68,111 basic salary. It is the prestigious role involving membership of the Council of State and travel abroad representing the State as well as co-hosting visits of foreign parliamentary delegations with the Ceann Comhairle.