Gsoc will not oversee Garda use of controversial spit hoods

The hoods are used to cover suspects’ heads to stop them spitting, coughing or biting 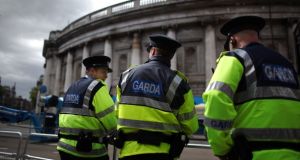 There is currently no direction for Gardaí to wear facemasks when dealing with the public. File photograph: Getty Images

The Garda Ombudsman will not have oversight over the use of controversial spit hoods by gardaí during the coronavirus crisis.

The hoods, 16,000 of which have been purchased by the force, are used to cover suspects’ heads to stop them spitting, coughing or biting police officers.

Unlike the use of firearms and, until last year, pepper spray, the Garda will not have to notify the Garda Síochána Ombudsman Commission (Gsoc) when they forcibly use spit hoods on suspects, a Gsoc spokeswoman confirmed.

She said Gsoc will continue to investigate allegations of excessive force against gardaí during the health crisis, including any allegations of misuse of the hoods, but that there will be no automatic reporting requirements.

This week the Irish Council for Civil Liberties (ICCL) wrote to Garda Commissioner Drew Harris, urging him to reconsider the deployment of the hoods which have been described by human rights groups as dangerous and degrading.

The hoods are being introduced in response to concerns from Gardaí about aggressive suspects spitting or coughing at them and threatening to infect them with coronavirus, which causes the disease Covid-19. Several people have appeared before the courts charged in relation to such offences.

Distribution of the hoods began on Wednesday.

“The practice of hooding has long been recognised as a form of torture and we believe the use of spit hoods could similarly constitute inhuman and degrading treatment,” ICCL Executive Director Liam Herrick wrote. “They could also be defined as a deprivation of liberty given their restriction on the body of the individual concerned.”

He cited evidence that the use of spit hoods has led to serious injuries and deaths elsewhere. “They can induce panic, cause distress and trauma, risk suffocation and can exacerbate dangerous situations.”

In London the general introduction of the hoods for the Met Police was initially opposed by its commander on the basis officers would be exposed to assault while trying to put them on suspects.

Mr Herrick said that despite “anecdotal evidence” of people coughing or spitting on others since the start of the crisis, “we don’t believe a proper evidence base exists to prove the necessity of introducing [HOODS]into Ireland. ”

Given the serious risk to human rights posed by the hoods, their use could only ever be considered in the most extreme circumstances - for example someone with Covid-19 deliberately trying to infect others, he said.

“Even in these most extreme circumstances, these hoods should not be used without clear protocols and proper training on their safety implications. This will take time to get right and we urge both clarity and caution in drafting protocols and ensuring proper training.”

The ICCL also expressed concern that use of the hoods may not cease with the end of the coronavirus crisis, as promised by the Garda.

It said the number ordered- 16,000- suggests an intention to use them “far into the future.” Over a one year period in London only 303 hoods were used, it noted.

Separately, Gsoc has begun receiving complaints from the public about Gardaí not observing social distancing protocols when dealing with them, a source said. These complaints are small in number and will be assessed “like any other complaint,” they said.

There is currently no direction for Gardaí to wear facemasks when dealing with the public. The Garda Representative Association has said it hopes that will change this week.

Nearly 50 republicans and loyalists interned without trial to sue state 20:44
Covid-19: People should keep record of who they meet to help contact tracers 20:07
Wild salmon in two rivers reported to have symptoms of red skin disease 19:48
Galway shuts down popular tourist spots and beaches over Covid-19 concerns 18:49
Taoiseach has confirmed schools will reopen at the end of August 18:38