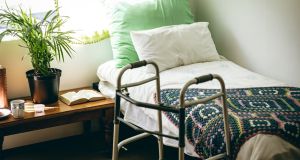 Latest figures from the Health Protection Surveillance Centre reveal 86 clusters of coronavirus in nursing homes as of midnight on Sunday. File photograph: Getty

Supports promised for nursing homes by Minister for Health Simon Harris to tackle coronavirus have not materialised to the level expected, Nursing Homes Ireland has said.

Chief executive of the representative body Tadhg Daly said there is a gap between what was promised and the reality on the ground concerning personal protective equipment (PPE) and testing for staff.

“The reprioritisation that we received from the Minister last week was very welcome, but it hasn’t materialised to the level that we would expect. The point we would make is that every day counts now and there is a gap between what was promised and the reality on the ground in two areas,” Mr Daly told RTÉ’s Seán O’Rourke show on Wednesday.

“One is the area of PPE. We accept fully that it is a logistical challenge but given the numbers now in nursing homes and given what we’ve been saying in Nursing Homes Ireland we do need that commitment delivered on.

“The other area is testing. Our members are crying out for staff and we have staff sitting at home in isolation awaiting tests or awaiting test results. Those are two critical issues and if those were resolved the nursing home sector is well capable of dealing with this particular pandemic.”

Mr Daly said the Minister’s commitment to reprioritise healthcare workers had to be delivered. “If it’s not, then I am fearful that the staff that we employ, and that’s in nursing homes right across the health service, won’t be there in the numbers when an even greater surge that’s expected hits the wider health service.”

Mr Daly said the latest figures from the Health Protection Surveillance Centre that there are 86 clusters of coronavirus in nursing homes as of midnight on Sunday is “very concerning”.

“The numbers are rising but we’ve known from the outset that Covid was always going to attack the weakest. But I suppose what we’re confident of is with the right supports given the dedicated and professional staff in the nursing home sector, we’re well able to cope with this,” he added.