NI bishops express ‘alarm’ at British proposals on the past

Assertion that measures are consistent with agreement rejected 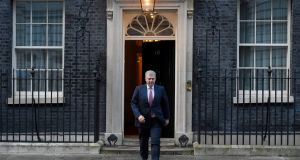 Northern Ireland’s Catholic bishops have issued a statement deploring proposals on how to deal with the past published by the Northern Secretary Brandon Lewis, above. Photograph: Peter Summers/Getty Images.

Northern Ireland’s Catholic bishops have issued a statement deploring proposals on how to deal with the past published by the Northern Secretary.

The Catholic primate Archbishop Eamon Martin and colleagues wrote to Brandon Lewis rejecting his assertion that last month’s proposals were “consistent with the principles” of the 2014 Stormont House Agreement.

The bishops said the Northern Ireland Catholic Council on Social Affairs made a submission to the Northern Ireland Office’s consultation on the past, stating that victims must be “given priority” and “that justice would be pursued, where possible, regardless of the identity of the perpetrator”.

“It is deeply concerning to us that the UK government has departed from this fundamental principle and has moved away from the position of equal access to justice for all,” the bishops’ letter said.

“State and non-state actors must be equally accountable before the law. Otherwise no authentic reconciliation can be achieved.”

Mr Lewis has proposed the creation of a single body primarily focused on information recovery and reconciliation rather than investigating killings. He also made clear that he expected that very few cases would lead to prosecutions.

The Stormont House Agreement proposed a historical investigation unit to investigate Troubles-related killings, an independent commission where perpetrators could tell the truth about their involvement in deaths without fear of prosecution; and an oral history archive allowing victims and others to tell their stories of the conflict.

Mr Lewis has said his proposals were consistent with the agreement, but the bishops disagree and wrote that they did not believe what was proposed “will deliver for all affected by the events of the past”.

The bishops were concerned about proposals regarding investigations, particularly the “onerous” requirements needed to pursue them.

“We do not believe such approaches represent fair and open access to the pursuit of justice for all. In fact, these approaches would self-evidently discriminate against victims of Troubles-related crimes in Northern Ireland,” they added.

The bishops said the timing of Mr Lewis’s announcement was “unfortunate”, coming during the Covid-19 emergency, and that their implications are “not receiving the widespread scrutiny they might otherwise receive”.

“We wish to express our alarm and disappointment at the new position which the UK government is taking to address the legacy of the past in Northern Ireland, and specifically its departure from the understanding inherent in the Stormont House Agreement to which all parties signed up to with goodwill.”

The bishops also warned that legislation on the proposals “could destabilise the Executive and other institutions” which were fragile having only resumed operations “after three years of political sclerosis”.