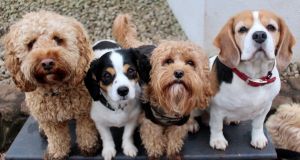 Some of Hannah Knight’s users of her daycare service.

Knight Tails is a Connemara-based doggy daycare service for small dogs, collected each morning and dropped off every evening at their homes from Inverin to Galway city, including Knocknacarra and Salthill.

And to celebrate her first year in business at the end of March, “I was planning on throwing a party for the dogs to celebrate.” But it was not to be.

When Covid-19 became a reality for Ireland, people began working from home and looking after their dogs themselves – a loss for her business but also for the pets, she said, which enjoyed each other’s company.

The business continued for a while but she did not have enough clients to be able to open each day and knew the business would have to close, before the formal Government shutdown of all but essential services.

She had wanted to see “if I could help any health workers or anybody who is not able to walk their dog themselves”.

And despite the adverse circumstances she said she was “absolutely overwhelmed how kind and supportive my clients have been”.

“A lot of people offered to pay me anyway which of course I won’t accept but it is just so kind and generous. And people are reassuring me that as soon as this is over, they’ll be back using my service as normal.”

Originally from Yorkshire in England, Ms Knight spent childhood summers in Connemara and later worked full-time in the fashion industry in London.

Following her move to Dublin in 2016 and then to Connemara, she set up the Knight Tails business.

Her normal day would have started with picking up the dogs from their houses. “I have quite a few where I just open the van door and they just run straight out of the house and jump in which is a nice way to start.

“It’s like meet and greet in the morning. They all say their hellos and start playing with each other.

They have “enrichment time where they’ll have toys to play with to use their brain to find treats inside things”.

“Sometimes we do a treasure hunt where I’ll hide treats around the daycare.”

At lunchtime they would go for a walk down to the beach and some will go swimming as well.

“In the afternoon they have nap time and snuggle up together on the couch.

“There is indoor and outdoor space and whoever wants to nap can sit inside and the others can play outside.”

That socialisation is now on hold as owners keep apart.

“It seems a bit surreal, that I worked really hard over the past year to build it up and then suddenly it feels like it’s going,” Ms Knight said. “But I do feel confident that it will come back and I just have to stay positive.”