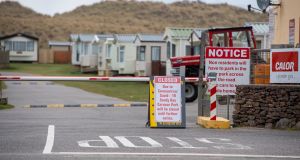 Some holiday homeowners in Kerry last weekend found gardaí at their door, inquiring where they were from and offering gentle encouragement to go back there.

This weekend, gardaí under Supt Dan Keane, the most senior garda in Tralee and west Kerry, will be stopping new arrivals. But they will also be telling those already in situ to stay where they are.

Beaches, caravan parks will be checked too, he told The Irish Times, urging those with travel plans to abandon them: “People are going to their graves. You cannot avail of a holiday home in west Kerry or anywhere else.”

Promising checkpoints around the county, Supt Keane said people will be ordered to turn back unless they can provide a satisfactory explanation why they are not covered by the temporary restrictions that last until Monday.

Last weekend, gardaí who approached some holiday homeowners were told they had come down before the Government introduced travel restrictions and the 2km limit on March 27th.

Those already in Kerry or elsewhere must now treat their holiday home as their primary residence for now, Garda Commissioner Drew Harris has made clear.

Reluctantly warning that prosecutions will follow for those who breach the regulations, Supt Keane said: “Clearly travelling to a holiday home or a caravan park or mobile home in Kerry or anywhere else is not essential travel.”

The numbers coming to owned, or rented holiday homes have surged in recent weeks from Ventry to Valentia Island in ways that are “unusual for this time of year” and in ways that have frightened locals.

Kerry has high numbers of second homes – 8,056 in 2016 and that only counted those unoccupied on census night. The county’s large number of mobile homes has to be added to this list also.

Local concern has been growing for a fortnight, with west Kerry Cllr Séamus Cosai Fitzgerald demanding extra policing: “We have very limited medical resources in Kerry, especially in west Kerry.”

Cahersiveen guesthouse owner Alan Landers, who like others in the town has closed his operation, said “a lot of strangers” had been noticed in the district in recent weeks.

Local Irish Hotels Federation spokesman Pádraig McGillycuddy of Ballygarry House said:“All I know is people are coming to their holiday homes. We are closed. Everything is closed for the first time ever.”

In Killarney, Paul Sherry, president of the local chamber of commerce, said bars, hotels and restaurants are closed: “The main focus is everyone comes through it well. Come when it is open again.”

In west Cork, an anonymous letter writer to the Neil Prendeville Show on Cork’s Red FM claimed the number of English- and Dublin-registered cars between Skibbereen and Ballydehob has increased sharply in recent days.

One English couple pulled up in his driveway to check on their satnav, with the female driver getting out to chat.

“I asked her to get back into her car and open the window to me. She threw her eyes to heaven and mumbled under her breath. I informed them that we were on 2km lockdown in this country and that we are taking it seriously here. She told me she was safe and healthy and not to be panicking like the rest of west Cork,” said the writer, adding that the couple then asked where Olympic rowers Paul and Gary O’Donovan lived so they could get a photograph with them.

“We don’t need or want these silly people that come around here that don’t understand what we are trying to do – we are trying to protect ourselves, our parents and our neighbours, particularly vulnerable ones that have cancer.”

In Donegal, gardaí stopped hundreds of cars crossing from Bridgend in Derry. Some were allowed to pass, but others were turned back. The same happened with Derry-bound traffic.

Tempers have frayed in Donegal in recent days with the numbers of Northern tourists arriving, or those coming from elsewhere in the Republic who had been intent on an Easter weekend away.

Urging those who had planned to travel to Donegal for Easter not to come, local Sinn Féin TD Pádraig Mac Lochlainn said: “You will be welcomed back with open arms when this all passes.”