Centre in Dublin docklands ‘will upgrade one of the most prominent locations in the city’, local authority planner said 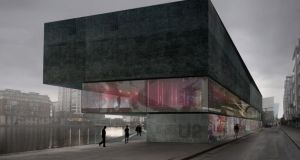 The proposed U2 visitor centre in Dublin’s docklands. 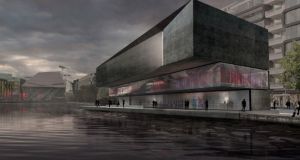 The proposed U2 visitor centre in Dublin’s docklands.

U2 has received the green light for the band’s visitor centre planned for Dublin’s docklands.

This follows Dublin City Council granting planning permission for the centre that is expected to attract 390,000 U2 fans annually.

In recommending that planning be granted for the development on Grand Canal Quay, the planner’s report in the case stated that the centre “will upgrade one of the most prominent locations in the city” and contribute “to the animation of the area”.

The report had special praise for the design of the planned centre by Dublin-based architects, ODAA.

The planner in the case stated that the development “will allow for the construction of a striking and innovative contemporary/modern building in an inner city location”.

The planner’s report added that the planned centre exhibits a distinctive contemporary design “which will make a positive contribution to the site and Dublin’s urban fabric”.

The proposal has faced strong local objections but the planner’s report states that the proposal “would not injure the amenity of property in the vicinity”.

As part of the 19 conditions attached to the grant of planning, the applicants, Paddy McKillen Snr’s Golden Brook Ltd and U2’s MHEC Ltd must pay a total of €225,647 in planning contributions towards public infrastructure and the Luas C1 Line Scheme.

The City Council gave the centre the go-ahead after U2 and Mr McKillen significantly reduced the height of its planned visitor centre in response to serious concerns expressed by the City Council last August.

Town Planning Consultants, Manahan Planners on behalf of the applicants told the Council that the reduction in height “is the maximum it can be reduced while still keeping the internal form of the building”.

The proposal is to include a reconstruction of the band’s original studio and various themed exhibit areas that include a series of abstract scenes such as ‘the Music Room’ and ‘Larry’s Kitchen’.

An objection lodged on behalf of 63 nearby apartment dwellers claimed that the proposal would result in overshadowing of apartments.

However, the most recent submission by ODAA confirmed that an independent light analysis conclusively demonstrated that the reduction in height “eliminates any potential impact on the quality of natural daylight reaching the buildings directly behind or any properties within the vicinity”.

In total, 12 objections were lodged against the proposal with seven submissions in favour including ones from Fáilte Ireland and Dublin Chamber.